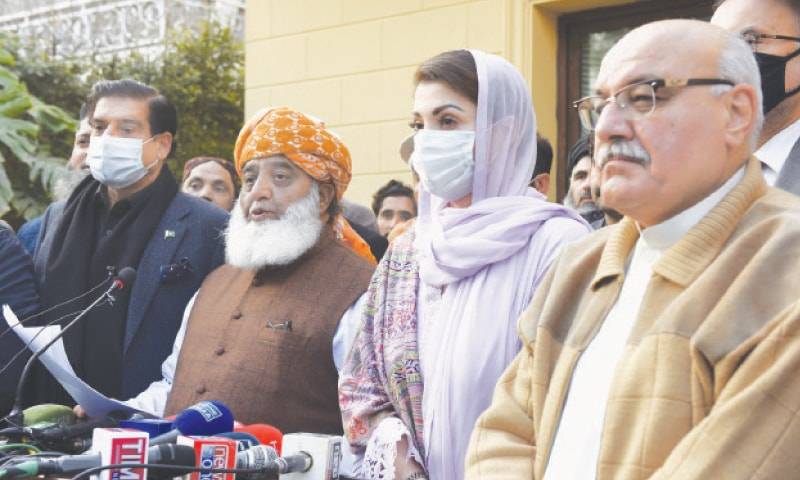 PDM chief Maulana Fazlur Rehman, PML-N vice president Maryam Nawaz, PPP leaders and others addressed a protest rally held outside the Elections Commission of Pakistan (ECP) in Islamabad against delay in a foreign funding case against the PTI, which was filed in 2014.

Fazlur Rehman, who is also chief of Jamiat-e-Ulema Islam (JUI-F), claimed that the delay in the proceedings showed the ECP was being pressurized.

He also lashed out at the election body for allegedly failing to hold transparent elections in the country in 2018, adding that incompetent people have been installed to ruin the country.

Fazlur Rehman added that Pakistan has lost confidence of its friend states including UAE and Saudi Arabia due to the incumbent government’s policies.

He also vowed to hold a massive long march against the government, adding that the fake rulers would not find a way to escape if it is held.

Maryam Nawaz while addressing the rally called the foreign funding case against the PTI as biggest fraud of the country.

She said that the people have gathered outside the ECP to remind the constitutional institutions of its obligations, adding that the foreign funding case is being delayed willfully.

He also accused Imran Khan of receiving funds from a leader of India’s Bharatiya Janata Party (BJP) and a Israeli man.

PDM to Hold Rally on Feb 5

PDM chief at the end announced to hold a rally on February 5 in Rawalpindi to express solidarity with people of Kashmir.