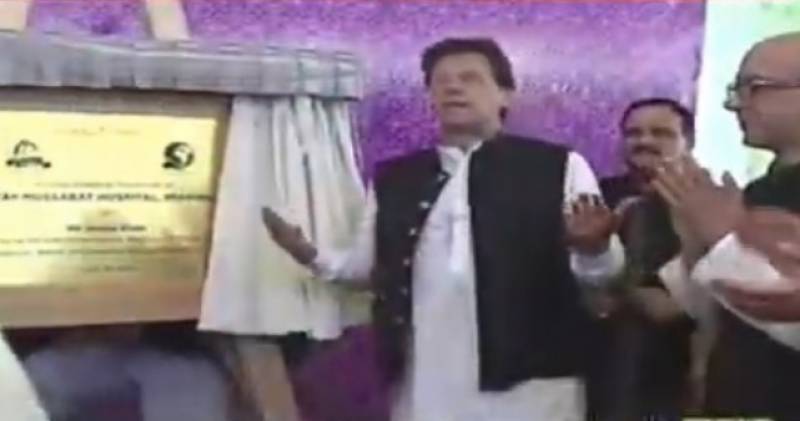 "Under the adopt-a-hospital project, we can bring a significant change in health sector through public-private partnership," the prime minister said in his address at the foundation-laying ceremony of a hospital in Mianwali's Namal valley.

The prime minister said the government alone could not revamp all hospitals across the country, however financial assistance from private sector could yield positive results.

He lauded British-Pakistani businessmen and founder of MCR property group Aneel Mussarat, who will finance the Namal hospital to cater to the health needs of thousands of patients.

He said several other groups had also approached him to adopt a hospital, which was an encouraging sign.

Terming corruption as the biggest impediment in the country's progress, Prime Minister Khan said looters of public money would be held accountable at every cost.

"This time, the powerful will come under the claw of accountability who had inflicted immense damage to the country during their tenures," he said.

The prime minister said regardless of any opposition, the accountability process would proceed unhindered.

"I have been waiting for this moment since 22 years [of my political struggle] to bring to book those who plundered public money," he said.

He said national culprits were raising hue and cry over accountability, dubbing it as 'political revenge and a threat to democracy'.

"In fact, they want to hide their corruption, but people are well aware of these political gimmicks," he said.

Imran Khan said the government had given full authority to the institutions to proceed with the accountability process without any pressure.

By ending corruption, the prime minister said he wanted to restore the confidence of international investors in Pakistan.

He said several overseas Pakistani entrepreneurs told him that they were willing to invest in Pakistan, but were hesitant over corruption.

The prime minister expressed confidence that Pakistan would achieve the status of a strong and prosperous country as the government of Pakistan Tehreek-e-Insaf had started taking tough measures in the best national interest.

"It's my promise to the nation that I will get this country on the trajectory of development," he said.

Prime Minister Imran Khan on Friday addressed the launching ceremony of Mianwali Express, to ply between Lahore and Mianwali, and said during his visits to the western countries, he would urge their leaderships to stop inflow of the corruption money to their countries, if they wanted that money to be spent for poverty alleviation in the developing countries.

The prime minister thanked the railways minister for launching another train for the people of Mianwali on his directive.

He said the facilitation of the common man was the only focus of the government. As the economic situation was easing consequent to loans from some friendly countries, the government would revamp the whole rail network.

taking an autograph from Prime Minister Imran Khan on the 1st ticket of Mianwali issued in Prime Minister's name as a Railway Souvenir at Mianwali Station on July 19, 2019 pic.twitter.com/DM1jCfD8rO

He said the Main Line-1 (ML-1) project would revolutionize the railway system by reducing the Lahore-Karachi travel time to eight hours besides thinning the burden on road network.

Reiterating his government’s priority to education and health sectors, the prime minister said the government would uplift all the areas which had been neglected in the past.

The facility would charge the passengers Rs 350 for the economy class and Rs 800 for the air-conditioned class.

The prime minister had recently launched Thal Express for the people of Mianwali, before launching the Mianwali Express which had stopped functioning in 1990.