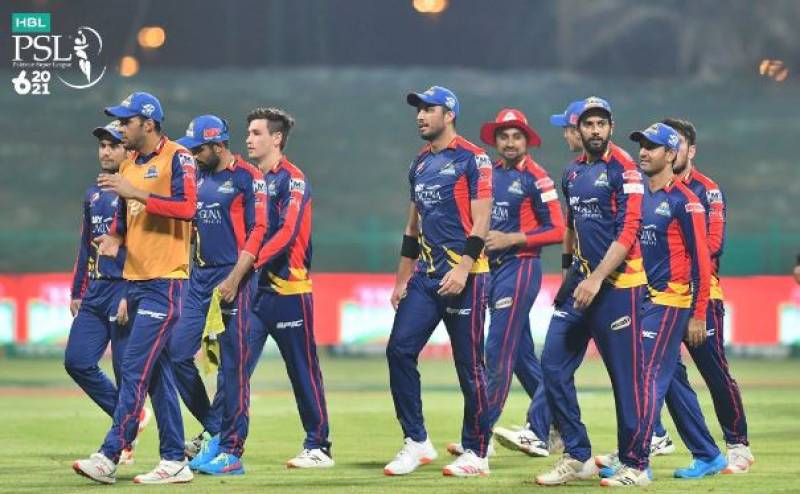 The Karachi Kings booked their place in the play-offs after beating the Quetta Gladiators by 14 runs in match number 29 of the sixth edition of the Pakistan Super League (PSL 6) at Abu Dhabi’s Sheikh Zayed Cricket Stadium on Saturday.

The Karachi Kings' victory threw the Lahore Qalandars out of the tournament and now they will join the last-placed Gladiators on the sidelines.

The Kings got their breakthrough in the fifth over when Mohammad Ilyas dismissed Saim Ayub (19). The Gladiators were already struggling to score big at that time.

Arshad Iqbal picked up the second wicket for the Kings in the eighth over as he bowled Jake Weatherald (25), piling up the pressure on the Sarfaraz Ahmed-led side.

In the 11th over, Mohammad Ilyas added pressure on the Gladiators when he dismissed Usman Khan (15), thanks to a good catch by the skipper Imad Wasim, while Arshad Iqbal took the wicket of Azam Khan (15) in the 13th over.

Hassan Khan was unlucky as Mohammad Amir's touch of the ball, driven by Sarfaraz, hit the stumps and led to a run-out — sending him back to the pavilion for 24.

In the 18th over, Ilyas picked up his third wicket as he dismissed Abdul Nasir (0), thanks to an easy catch by Danish Ali five yards in from the rope.

Gladiators' skipper Sarfaraz Ahmed finished the match with an unbeaten 51.

All-rounder Danish Ali proved to be a crucial player for the Karachi Kings, as he scored 45 from 13 balls, which had paved the way for his team to set a target of 177 for Quetta Gladiators.

The Kings had opted to bat first after winning the toss.

The side started losing wickets after the 10th over. However, after Ali came in, the wickets stopped falling and the all-rounder helped the team put up a competitive score.

Abdul Nasir was able to get the first breakthrough for the Gladiators in the first ball of the 10th over, dismissing the Kings' star batsman Babar Azam (23) with a good catch by Hassan Khan.

Following Nasir's breakthrough, spinner Arish Ali was able to take two wickets — Sharjeel Khan (45) and Martin Guptill (5) — in the 11th over, while he got two others, Najibullah Zadran (12) and Imad Wasim (3), in the 15th and 17th overs, respectively.

In the 20th over, Khurram Shahzad bowled Ali — the batsman who changed the course of the match despite being under immense pressure. Moreover, Mohammad Ilyas (1) was run out on the last ball of the over.