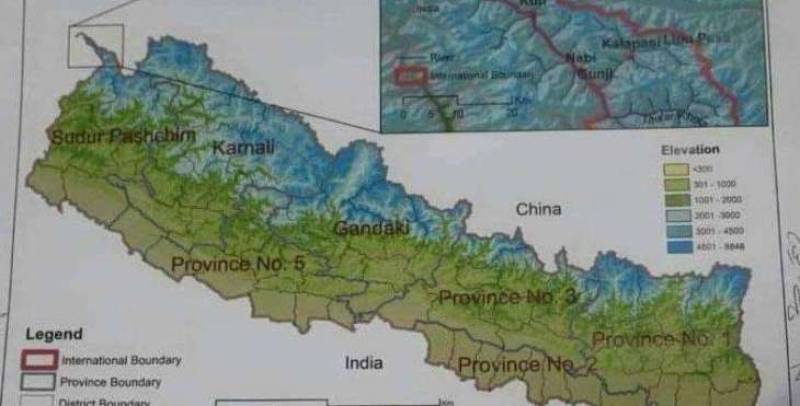 KATHMANDU – Nepal has drawn-up a new political map that includes strategically important territory it disputes with India, officials said Tuesday, as the Himalayan country takes a tougher stance against its giant neighbour.

Protests have been staged in Nepal since India earlier this month inaugurated an 80-kilometre (50 mile) road in Uttarakhand state leading up to the disputed Lipu Lekh pass.

Nepal claims the pass under an 1816 treaty that sets the boundary with India along the Kali River, but disputes have arisen because neither side can agree its source.

The zones form a region of more than 300 square kilometres (115 square miles) considered important because it is where the Nepalese and Indian borders touch China.

"Nepal will initiate dialogues with India simultaneously to resolve the boundary issue through diplomatic channels" she said.

Nepal claims the Kalapani region, which adjoins Lipu Lekh, even though Indian troops have been deployed there since India and China fought a border war in 1962.

India and Nepal had both shown Kalapani and Lipu Lekh in their political maps, but Nepal had not previously shown Limpiyadhura.

"It was an issue of contention when Nepal first drew its map in the 1970s, but it was decided that Limpiyadhura area would be drawn after a discussion with India," border expert Buddhi Narayan Shrestha said.

Nepal condemned India's new road as a "unilateral act" while India maintained that it lies "completely within the territory of India".

Nepal has since deployed security forces close to Kalapani.