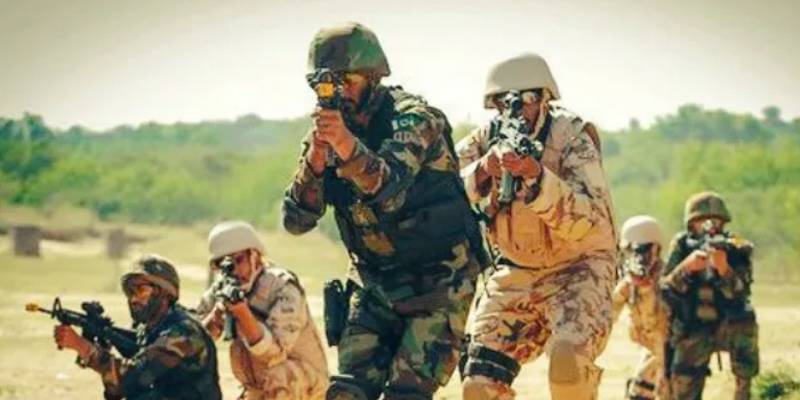 RIYADH - Saudi Arabia’s Special Security Forces are preparing to carry out a joint military drill - Shehab 2 - with the Pakistan Army Services Group in the city of Riyadh soon.

The Commander of the Forces, Lieutenant General Mufleh bin Salim Al-Otaibi said that the military drill aims to exchange military expertise in fighting against terrorism and upgrading the level of performance, efficiency and readiness of military forces from the two brotherly countries, the official Saudi Press Agency reported on Sunday.

The announcement comes a day after the 41-nation Islamic Military Alliance against Terrorism (IMAT) announced it would hold its first meeting of defence ministers from member countries in the Saudi capital next week.

The defense ministers of this Saudi-led anti-terrorism alliance of Muslim countries will meet in Riyadh on Nov. 26, according to SPA.

The meeting of the Islamic Military Alliance to Fight Terrorism aims at “strengthening cooperation and integration” among the alliance members.

The 41-member bloc of all Sunni nations was launched by Saudi Arabia in late 2015 with a view to fighting terrorism. It includes countries such as Turkey, Malaysia and Egypt.

SPA said the meeting would mark the “actual start” of the military alliance and coordination against extremism and terrorism.

Pakistan has traditionally maintained that its bilateral relationship with the Kingdom of Saudi Arabia is its “most important diplomatic relationship.”

Besides both being members of the Organization of Islamic Cooperation (OIC), the two have long maintained a strong military relationship. Pakistani military personnel frequently serve in Saudi Arabia and its last army chief, General Raheel Sharif, now heads a 41-nation Islamic army coalition based out of Riyadh.

The coalition was envisaged to serve as a platform for security cooperation, including provision of training, equipment and troops, and involvement of religious scholars for dealing with extremism.

ISLAMABAD - The Saudi Pakistani military exercise, Al-Sammam 6, kicked off in the country on Wednesday, the Saudi Press ...

Last month, the Pakistani Army concluded Al-Saman 6, a three-week military exercise with the Saudi Royal Land Forces. Drills included use of live ammunition, ambushing, combat patrolling and special training on how to deal with IEDs, under commanding officer Lieutenant General Akram Al Haq from the 30th Corps of the Pakistani Army. Pakistan has also been keen to sell arms to Saudi Arabia and has enjoyed Saudi support while developing its nuclear weapons program.