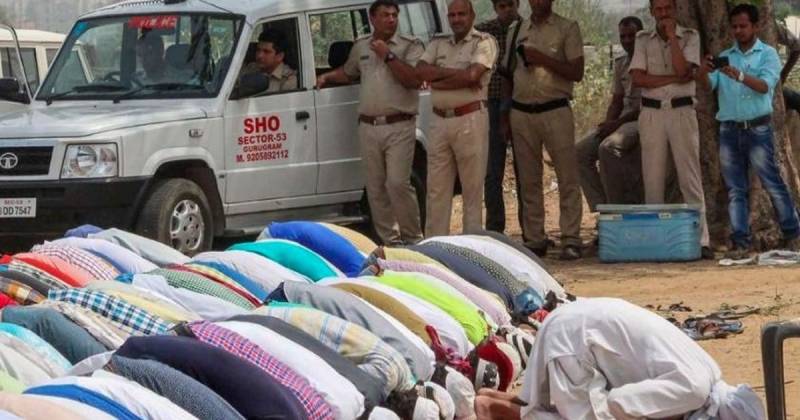 After an official ban on Muslim prayers at open places in India’s Gurugram city near New Delhi, a local organisation taking care of gurdwaras, holy places of the Sikh religion, has announced opening the doors of a gurdwara for Muslims.

Hindu extremists have been protesting against the Muslims’ act of offering Friday prayers at open places outside mosques for the last several weeks. As Muslims in larger numbers swarm mosques to say their weekly Friday prayers, mosques mostly cannot accommodate these big numbers of worshipers and they have to use the open places outside the mosques to say their prayers.

Keeping in view the protests by Hindu extremists, the local authorities in Gurugram city have stopped the Muslims from using the open places outside the mosques to offer their Friday prayers and cancelled the permission letters issued earlier in this regard.

Hindu extremists have also been disrupting the Muslim Friday prayers at open places by raising their religious slogans.

Last week, Hindu extremists filled an open place with cow dung where Muslims were going to say their Friday prayers the next day. They said they wanted to turn that place into a volleyball court.

Against this backdrop, an organisation associated with gurdwaras of the Sikh religion has come forward and announced opening a gurdwara in Gurugram so that Muslims can offer their Friday prayers there.

Harteerath Singh, Community Development Director at Hemkunt Foundation, wrote on Twitter, “Gurgaon’s Sadar Bazaar Gurudwara is now open for our Muslim brothers to offer their daily namaz keeping in mind the recent events that took place in the city.”

#Gurgaon’s Sadar Bazaar Gurudwara is now open for our Muslim brothers to offer their daily namaz keeping in mind the recent events that took place in the city.

And then he also talked about the threats that Hindu extremists were hurling at him and his family. He wrote, “You may give me countless death threats, abuse and troll me and my family but humanity will always prevail. Will always stand up for truth and sewa.”

Pakistan has strongly condemned these acts of Hindu extremists against the Muslim minority in India and the restrictions imposed by the BJP-led Haryana government on the Muslims.

Pakistan’s Foreign Office said in a statement, “Pakistan strongly condemns the restrictions imposed by BJP’s Haryana government on offering Friday prayers by Muslims at several places in the state. We are also deeply concerned over continued vandalization of mosques and attacks against prayer places of Muslims by Sangh Parivar extremists with complicity of BJP ruled states of Uttar Pradesh and Haryana.

“The senseless attacks against Muslims and their places of worship, houses and businesses are continuing in Tripura as well despite international concern. The BJP ruled states have arrested hundreds of individuals including well known advocates and journalists under the draconian laws such as Unlawful “Activities (Prevention) Act for raising voice against gross and systematic human rights violations of minorities particularly Muslims.

“In the state of Maharashtra, violent attacks were unleashed against Muslims’ shops, mosques and shrines by radical activists of BJP and its affiliated groups including Bajrang Dal, Vishwa Hindu Parishad and Maharashtra Navnirman Sena.

“Pakistan calls on the international community, particularly the United Nations and relevant international human rights and humanitarian organizations to fulfill their responsibilities to stop the rising Islamophobia and violent attacks against minorities particularly Muslims in India and ensure their safety, security and well-being and the protection of their places of worship.”