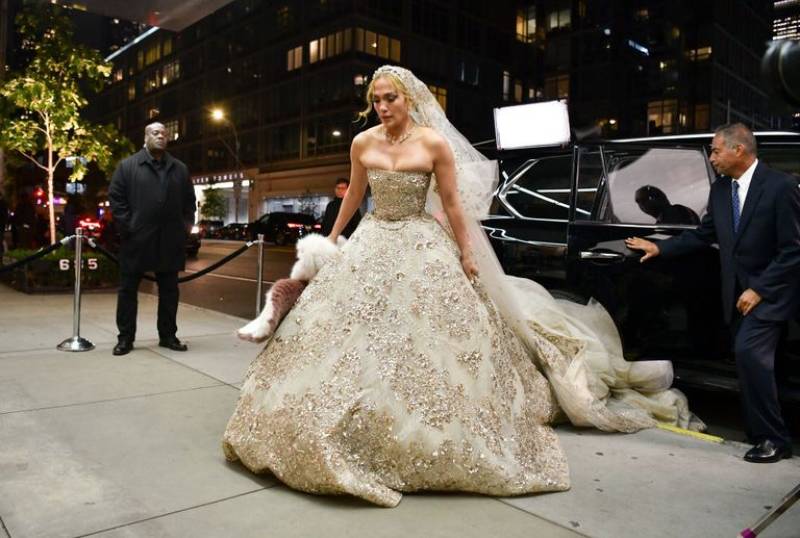 LOS ANGELES - On Thursday, Hollywood star Jennifer Lopez was snapped filming in the Big Apple for her next film, Marry Me.

In addition to the film title, Lopez's look for the shoot was even more apropos: a stunning and extravagant bridal ball gown by Zuhair Murad covered with glittering embroidery.

The star was accessorized with jewels, fur and a lavish matching veil. Judging by the paparazzi photos, the dress was so large, it required some helping hands to move. Needless to say, the snaps instantly brought Cinderella to mind.

However, the plot of Marry Me sounds more like a modern fairy tale turned on its head. The upcoming rom-com, based on the same-titled graphic novel by Bobby Crosby, will reportedly focus on a pop star who is supposed to marry a fellow music star at Madison Square Garden, according to The Hollywood Reporter.

However, shortly before tying the knot, she finds out her fiancé has been cheating on her and, following an on-stage meltdown, picks a random man out of the crowd to marry.

With Lopez playing the lead and Owen Wilson set to portray the math teacher she plucks from the audience, it sounds like plenty of laughs are in store for the star's latest silver screen venture.

And then, maybe, some real-life wedding bells will be ringing for J.Lo. We're listening carefully!