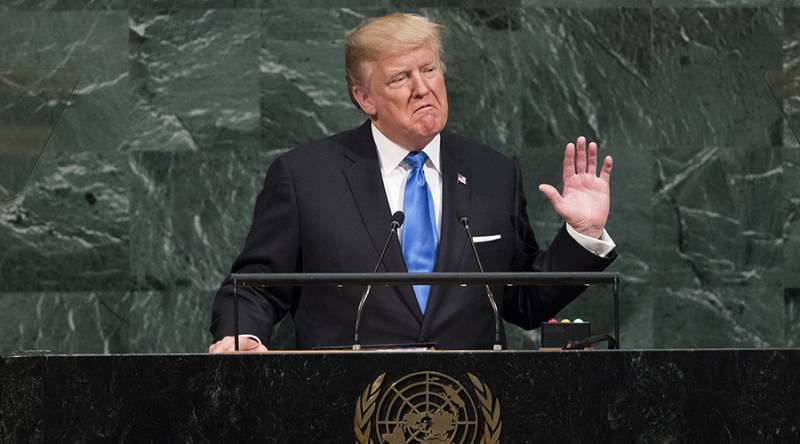 NEW YORK - In his first address to United Nations, US President Donald Trump has threatened North Korea with total destruction if it attacks the US or its allies. He also blasted Iran, Venezuela, Cuba and Syria.

If forced to defend itself and its allies, the US “will have no choice but to totally destroy North Korea,” Trump said in his remarks at the 72nd session of the UN General Assembly on Tuesday. He also called North Korean leader Kim Jong-Un a “Rocket Man” on a suicide mission.

This is real life. pic.twitter.com/7J0y4RzgfY

The photos have already been created. #UNGA #RocketMan pic.twitter.com/hMssndXJ8Q

Trump thanked China and Russia for joining the US at the UN Security Council to impose new sanctions on the DPRK. In the past two month, the UNSC passed two rounds of sanctions against North Korea for its repeated testing of ballistic missiles.

Last week, Moscow told Washington that while Russia and China are implementing the sanctions part of the UNSC resolution, the US must deliver on its obligation to pursue diplomacy to defuse the crisis.

Meanwhile, the North Korean envoy actually left the room before Trump took to the podium and made more threats against Pyongyang.

North Korea warned on Monday that the more sanctions imposed on it, the more quickly it will complete its nuclear force, official state news agency KCNA reports.

Trump declared the 2015 nuclear deal with Iran an “embarrassment to the US,” adding, “frankly, I don’t think you’ve heard the last of it.”

His administration has threatened to quit the deal if the International Atomic Energy Agency (IAEA) did not require and obtain access to all Iranian military sites.

The UN’s nuclear watchdog last week certified that Iran complied with the agreement, which was negotiated by world powers - including the US - two years ago, in order to make sure Iran does not build nuclear weapons.

Trump also railed against Venezuela and its leadership, saying the US will help the Venezuelan people “regain their country and restore their democracy.”

“We call for the full restoration of democracy and political freedoms in Venezuela,” Trump said, adding that the US has imposed sanctions against the government of President Nicolas Maduro and is prepared to do more.

He then went on to blast socialism in places like Venezuela and Cuba, saying that their problems stem from the fact that “socialism has been faithfully implemented.”

Earlier in the speech, however, Trump spoke about the importance of sovereignty as a guiding principle in international relations.

“We do not seek to impose our way of life on anyone,” Trump said. “We are guided by outcomes, not ideology.”

The American president stated he will always put America first, just like other leaders in the room “will always and should always put your countries first,” he said, drawing brief applause from the audience.