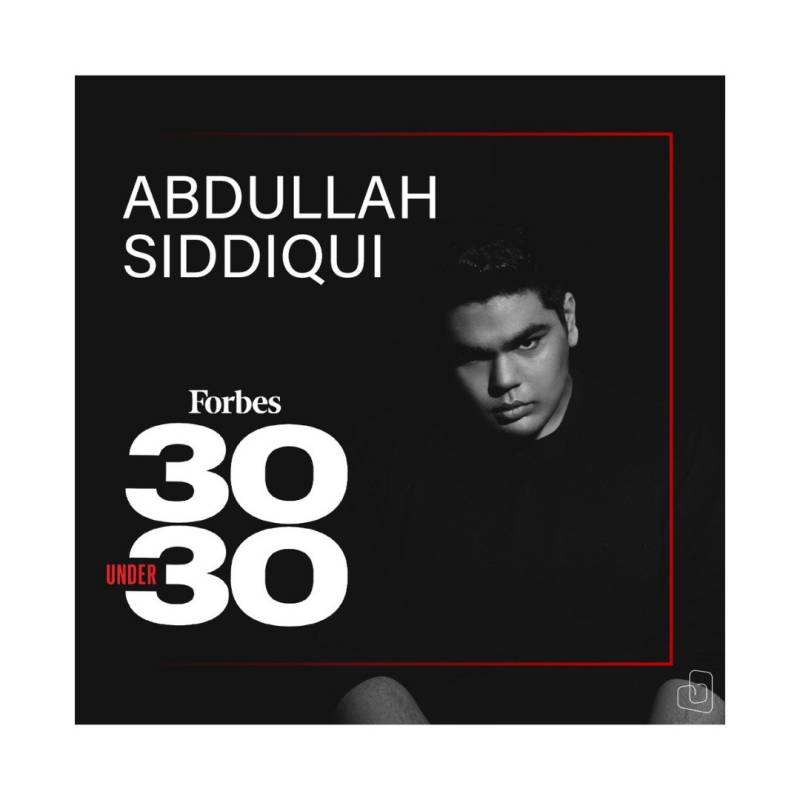 KARACHI – Abdullah Siddiqui, one of Pakistan’s leading music producer and artist, has been named and listed on the prestigious FORBES 30 Under 30 Asia 2021 list. At 20, Abdullah Siddiqui is the youngest, and only, Pakistani within the field of Entertainment and Sports to appear on the coveted list for 2021.

“As Asia sees the light at the end of the Covid-19 tunnel, activists, entrepreneurs, scientists and young leaders on the Forbes 30 Under 30 Asia 2021 list are hard at work realizing the new normal. After the toughest year in their generation, these 300 Millennials and Gen Zs have persevered to survive and even thrive despite long lockdowns, restricted travel and uncertainties on all fronts. Selected from over 2,500 nominations and vetted by our team of reporters and a panel of A-list judges, these trailblazers are unparalleled examples of determination, hard work, and innovation.” - Forbes

Speaking about this achievement, Abdullah Siddiqui has said: “I’m so thrilled to be included and recognized. I’m deeply grateful right now to everyone who’s listened to my work and supported me over the years. Really a surreal moment.”

Recognised by FORBES for his groundbreaking work as a music producer, Abdullah Siddiqui began producing English-language electronic music at the age of 11 and started releasing it as an independent artist when he was 16. Born and bred in the cultural capital of Pakistan, Lahore, Siddiqui fell on the underground/indie music circuit radar when he made his Forever South (FXS) debut, the net label co-founded by artists Rudoh and Dynoman with the experimental track, ‘Fiction’. Since then, he has appeared on True Brue TV, Nescafe Basement, Coke Fest, and Pepsi Battle of the Bands while headlining various concerts across the country.

Siddiqui has also released three critically acclaimed full-length albums and a multitude of singles, most recently the first-ever English language PSL official anthem for Peshawer Zalmi, Kingdom, which currently sits at over 4 million views. He has written and produced music for some prominent singers in Pakistan, including Fawad Khan, MeeshaShafi, Shamoon Ismail, and Aima Baig.

Siddiqui has also been nominated four times at Lux Style Awards in various music categories. His innovative second album Heterotopia featured collaborative tracks with MeeshaShafi, Zoe Viccaji, Shamoon Ismail, Natasha Noorani, and Aima Baig. Earlier this year, Siddiqui released Dead Beat Poets, the third collection of the stories he tells through his songs. Dead Beat Poets marked a departure from Siddiqui using obscure Greek words to describe the complex nature of each of his albums. Indeed, Abdullah Siddiqui wears the hats of composer, writer, and producer/engineer, for all his productions and is all set to release his fourth album in the summer of 2021.