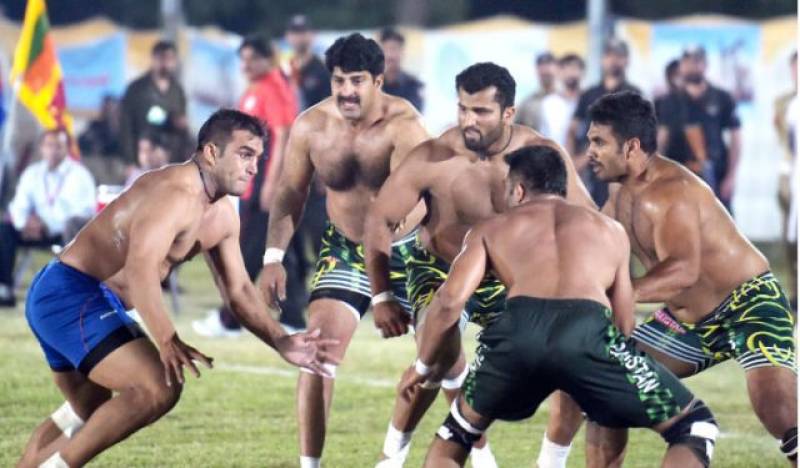 Scene 1--An imaginary evening in Lord's London: The city of London by night is just as, if not more, beautiful than it is in the day time. When the sun does down, the city lights up and many of London's most famous landmarks are showcased across the city's skyline. Tower Bridge, Millennium Bridge and St Paul's Cathedral, Southbank, Soho, The London Eye, Leadenhall market, Chinatown, Canary Wharf and many traditional London's pubs. But all the eyes are set at Lord's this evening as the final match of the world kabaddi tournament is being played between Germany and the UK. There is a hard competition and the stadium is full to capacity.

Most of the Western spectators are holding placards with Urdu and Hindi writings. Many of them are wearing South Asian dresses and the commentary of the match is also in Urdu as most of these people of the European countries speak, write and some even understand only Hindi or Urdu. These are their official languages since they had been South Asian colonies for many past centuries. They know more about Indo-Pak culture, language, literature, festivals and games than any other in people in the world.

At this moment when kabaddi is being played in the Lord's, many poor English children are playing cricket in the streets of Barking, Dagenham and Havering areas of London, wearing dirty old dresses. The economic condition of these people is dismal due to malpractices of the governments, circular debt, purchasing weapons from the former South Asian colonialists to fight with one another.

But strangely enough every German, French, English and all other former European colonies are trying to more Pakistanis and Indians than the real Indians and Pakistanis. This evening, Lord's London is a wonderful example of this slavish European attitude towards their exploiting nations.

Zubair Aslam a.k.a. Jhara Pehlwan is standing near Texali Lahore on a kebab shop. He is highly intoxicated, his eyes are glossy and red. There is acute pain in his body due to being intoxicated. He chows down on all the kebab in a very short time. Suddenly he feels giddy and starts vomiting. Jhara is taken to the hospital where the doctor reveals that he is an addict of the lethal drug heroine.

Jhara Pehlwan, at the zenith of his glory of being the greatest world wrestler, the pride of Pakistan, Rustam e Pakistan is ensnared in such a killing addiction and no one in the governmental sports authorities is aware of it. On the 11th September of 1991, at the young age of 31, this legendary athlete dies due to utter neglect and insensitivity of the concerned authorities. Perhaps his crime was to be the player of a local cultural game.

The last renowned wrestler from the family of Goga Pehlwan; best known for his defeating Japanese wrestler Anoki, Jhara was one of Pakistan's leading wrestlers and remained undefeated in more than 60 domestic and international matches. But he was finally defeated by the slave mentality that we prefer to sponsor only the imported kind of sports. We spend millions of rupees to improve the bowling action of a cricketer and it's not to speak against cricket that's a very popular game.

16 Feb Punjab Stadium Lahore. It is a great evening when Indian and Pakistani wrestlers played the final match of the 2020 kabaddi world cup. Truth is that more than a match, it was a festival, a celebration of our culture, a victory regardless of the result which team wins. In a sensational match, Pakistan won by 43 to 41 points. Pakistan has won the kabaddi world cup for the first time. but the real victory is that both the sides exhibited top-class kabaddi during the tough contest.

The origin of kabaddi can be traced to pre-historic times. Kabaddi was primarily devised as a way to develop the physical strength and speed in young men. During its inception, kabaddi was played to boost the self-defence skills and to develop quick responses to attacks. The game calls for pro-activeness, presence of mind, SWOT analysis, physical strength, crisis management and understanding opponent's strategy. The game calls for agility, good lung capacity, muscular co-ordination, presence of mind and quick responses.

At the start of this write-up, the first imaginary scene was enacted to emphasise and more so make clear, how a nation is recognised by its original ethos, customs and culture. When some nations mindlessly follow foreign values, tradition, they gradually become faceless.

We can adapt foreign practices but after acculturation and acclimatizing. Pakistan's great culture is a melting pot of Indian, Persian, Afghan, Central Asian, South Asian and West Asian influences. Culture is our way of life, it includes our values, customs, languages and traditions.

Our culture measures our quality of life, our vitality and health of our society. Through our culture, we develop a sense of belonging, personal and cognitive growth and the ability to empathise and relate to each other. So keeping loyal to our culture, we can bring back the Lahore of our collective memories in our present-day life once again.