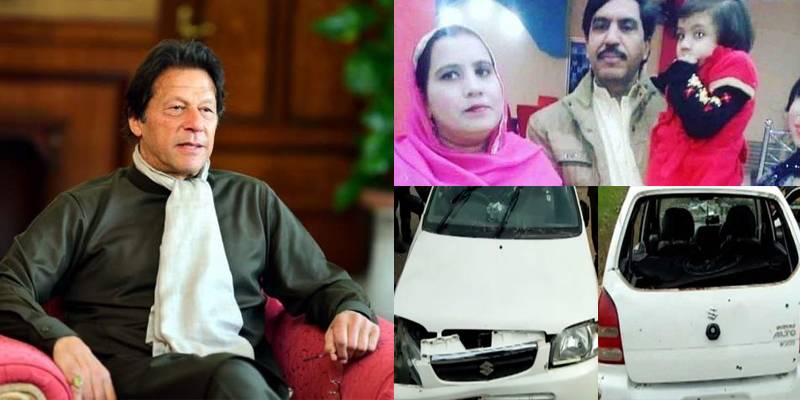 ISLAMABAD – Prime Minister Imran Khan says as soon as the JIT report comes, a swift action will be taken against those responsible for the Sahiwal incident.

Police claimed Javed was a wanted terrorist and initially accused him of using the others as human shields.

Later, the CTD team took the bodies, children and other valuables from the vehicle. However, the team, later on, dropped the children at a filling station.

The incident triggered a national outcry that prompted the Pakistan Tehreek-e-Insaf (PTI) government take the security officials into custody and order an investigation into the incident.

The counter-terrorism officials claimed that the operation was conducted to capture an “Islamic State (IS) commander” on a tip off by an intelligence agency.

In a tweet Sunday, the PM said though the Counter Terrorism department has done a great job in fight against terrorism, everyone must be accountable before the law.

He said protection of all citizens is priority of the state.

While the CTD has done a great job in fight against terrorism, everyone must be accountable before the law. As soon as JIT report comes, swift action will be taken. The govt's priority is protection of all its citizens. https://t.co/Vek2YHLmKQ

Imran Khan said he is still shocked at seeing the traumatized children who saw their parents shot before their eyes.

He said these children will now be fully looked after by the state as its responsibility.

Meanwhile, a footage of the alleged 'encounter' on GT Road near show CTD officials surrounding the vehicle and pointing their weapons while the police mobile vehicle is stopped at some distance.

The video details children being taken out of the vehicle to the police mobile van. The police then open fire at the vehicle, leaving four people dead on the spot.

Following the shocking incident, scores of people including relatives of the family killed by a team of the Counter-Terrorism Department (CTD) in Sahiwal took to the street and vent their anger over the incident.

They blocked Ferozepur Road at Chungi Amar Sidhu and raised slogans against the CTD officials demanding action against them. The deceased had been living in Lahore’s Kot Lakhpat area.

The four-hour long agitation threw traffic out of gear as hundreds of vehicles were stuck in long queues. Initially they announced that they would march on The Mall but dispersed later after senior police officers reached there and held negotiations with them.

Meanwhile, the relatives of Khalil and Zeeshan, the two persons among those killed in firing by the CTD, denied any link (of the deceased) with the proscribed organisation.

“My brother Khalil was innocent and killed along with his wife and daughter on the basis of fabricated reports of the CTD,” Naeem told the media. He said it was a case of extrajudicial killings and demanded registration of a murder case against the officials under anti-terrorism charges.

Naeem said his brother was running a general store in the area and had no criminal record.

A large number of social media users have called it a test case of the PTI government, demanding of an exemplary action against the responsible:

State terrorism is not acceptable.After listening to this kid I don’t need to wait for the JIT report on the brutal murder of his parents and sister by CTD Punjab CM Punjab must order to arrest CTD officials otherwise he may pay the ultimate price of this brutality pic.twitter.com/YgsQ9OnEl3

Please @ImranKhanPTI, we need to focus on more than statements. If the state cannot PROTECT its citizens, how can you ensure that it would take care of the three children who will be traumatised forever by #SahiwalKillings

We are fed up of this kind of shir JITs reports. Nothing had been done against such reports. We voted suported you for revolution sir but find nowhere up till now. We have firm believe in you but disappointed by your team. 😕