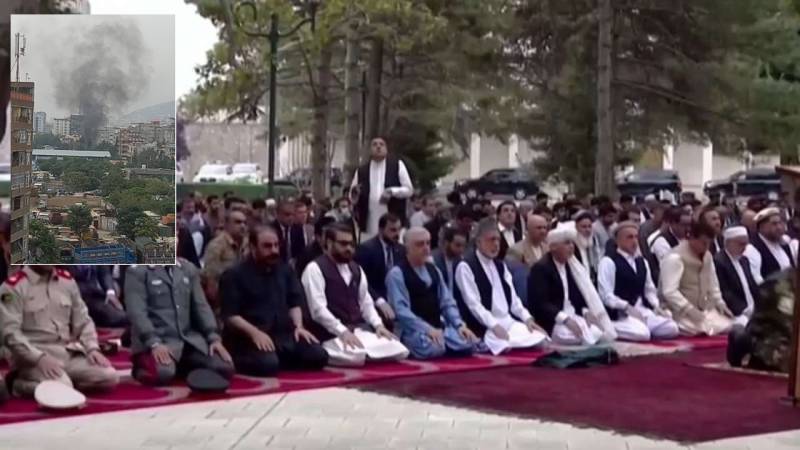 Reports in media quoting the Afghan interior ministry said three rockets landed around 8:00 am in the country’s capital ahead of a speech by President Ashraf Ghani during the Eid al-Adha prayers. The loud explosions were heard across the heavily fortified Green Zone that houses the presidential palace and several embassies.

Footages of Afghan news channels show that the Afghan premier continued with the prayers despite multiple loud explosions in the area.

Video by national TV shows the moment rockets landed near the Presidential Palace during Eid prayers this morning. pic.twitter.com/WmEniyfLfM

Afghan Interior Ministry spokesman Mirwais Stanikzai while speaking with an international news agency mentioned that “Today the enemies of Afghanistan launched rocket attacks in different parts of Kabul city.” He also mentioned that “all the rockets hit three different parts while no casualties have been reported. Our teams are investigating the matter”, he further added.

Afghan president later delivered a speech from an outdoor podium broadcast on local news channels. The official also revealed that such attacks have been aimed at the presidential palace several times in the past.

The militants, unlike previous years, did not declare a ceasefire during the Eid holiday this year, despite multiple calls from Afghan officials and the international community.

Meanwhile, the recent attacks coincide with ongoing unrest following the US withdrawal while the insurgents continued attacks across the country.

Over the weekend, the Taliban’s supreme leader Hibatullah Akhundzada said he ‘strenuously favours’ a political settlement – even as the group continues its offensives whereas the insurgents have been capturing districts, seizing border crossings, and encircling provincial capitals.

KABUL – Amid the deadly clashes between the Afghan armed forces and Taliban fighters in the war-torn country, the ...