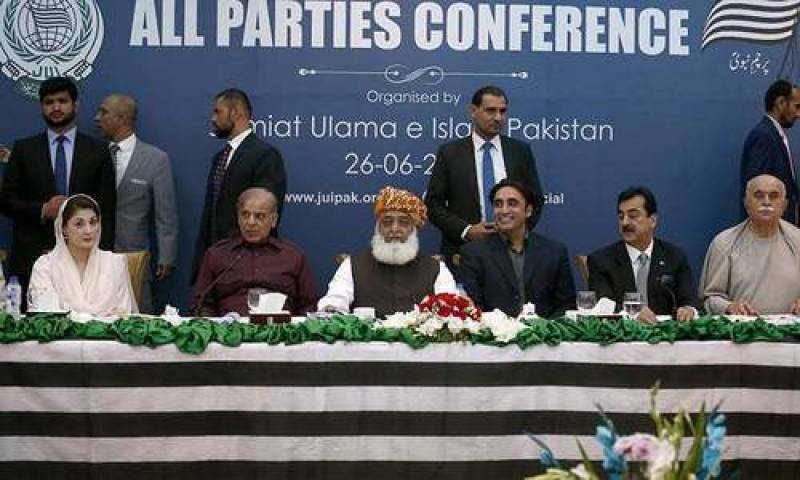 A gathering of 12 parties and all opposition leaders, including Asif Ali Zardari and Nawaz Sharif, agreed on a 26-point charter of demands in the PPP-hosted multiparty conference in the federal capital.

According to Sunday’s resolution, the forum is named Pakistan Democratic Movement (PDM) — an "alliance structure which will lead and guide nationwide protests against the anti-public and anti-nation government in a disciplined and integrated manner".

After hours of discussion over ways to oust the "selected" government, opposition parties demanded the "immediate" resignation of Prime Minister Imran Khan.

The meeting declared that the "incumbent selected government has been granted artificial stability by the establishment that has imposed it on the people through rigged elections", said JUI-F chief Maulana Fazl-ur-Rehman.

The forum also demanded that elections be held again in a transparent manner and that electoral reforms should be made in order to ensure free and fair polls.

Terming the Parliament a "rubber stamp", the PDM declared that the opposition will not cooperate with the government in the legislative process.

The APC expressed grave concerns over the "complete failure" of the government's policy regarding Afghanistan.

We will continue to restore democracy by removing PTI govt: Zardari

It also condemned "unprecedented" gags on the media and censorship, demanding that media tycoon Mir Shakil-ur-Rahman be released along with other media persons.

It also demanded that a new law of accountability be passed in the country that is in accordance with the Supreme Court's verdict and recommendations from Human Rights Watch and Council of Islamic Ideology and would hold everyone accountable, including bureaucrats, lawmakers, judicial and army officials.

PDM also agreed upon a six-point action plan to depose the incumbent government, which would be implemented in phases. In the first phase that starts in October, opposition parties will hold joint rallies in all four provinces.

The opposition will also enlist lawyers, traders, farmers, students, media as well as members of the civil society in its movement. In order to oust the government, opposition parties will use "every legal and constitutional option in and out of parliament, which include moving no-confidence motions and collective resignations from assemblies at an appropriate time," the resolution states.

The forum also demanded transparent elections in the country and calls for electoral reforms.

According to the declaration, due to the "non-implementation" of the National Action Plan there has been "a surge in terrorism".

The opposition has also called for elections in Gilgit-Baltistan to be held on time and "without intervention".