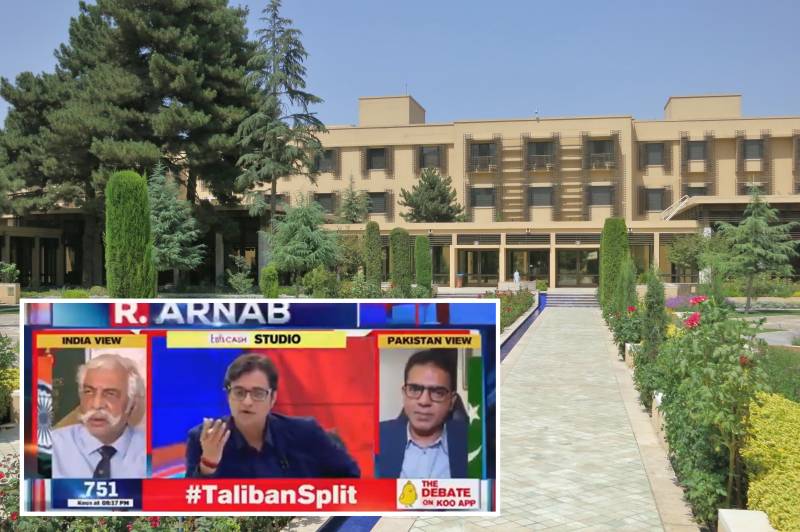 NEW DELHI – Indian prime time host Arnab Goswami has been mocked and ridiculed by the netizens for spewing fake news about the presence of Pakistan’s intelligence officers on the fifth floor of a two-story hotel in the Afghan capital.

Following the outlandish stories about Lollywood actors’ death in Panjshir valley, the brazen fake news about the Serena hotel has left Indian media red-faced. The Indian media has churned out a lot of fake and hilarious news about Pakistani security forces but only to embarrass themselves.

Recently, Goswami, who is famous for being a ‘puppet’ of the Indian ruling party, claimed the presence of Pakistan Army officers on the fifth floor of the Serena Hotel. He alleged Pakistan’s intelligence officers of supporting the Taliban in their fight against Afghanistan’s now fallen Panjshir valley.

In reality, the accommodation facility in the Afghan capital is a two-story building while the gaffe of the Republic World TV anchor about the unseen fifth floor has left him red-faced. In the viral clip on social media, the war-mongering host can be heard about having his sources who are having an eye on Pakistani forces in Afghanistan.

Discussing nothing but a hoax about the Taliban split, Goswami claimed that his information had proven to be true. The resistance in Panjshir is continued while Pakistan’s security forces are helping the Taliban, he said.

Being fully assured of what he claimed, Goswami also mentioned to specify the room numbers of the Pakistani officers.

Following the brazen fake news, social media users took to Twitter to roast Indian journalists while #ArnabGoswami is still trending on the microblogging platform. Here are some of the reactions:

“My sources have confirmed that the 5th floor of Serena Hotel Kabul is filled with ISI Agents who are staying there to fight in Panjshir Valley.”

“ Meanwhile Serena hotel in Kabul have only two Floors”

#ISIon5thFloor #ArnabGoswami
ISI taking all 5 floors with them so they leave no clue behind. pic.twitter.com/CqBbxHYmwd