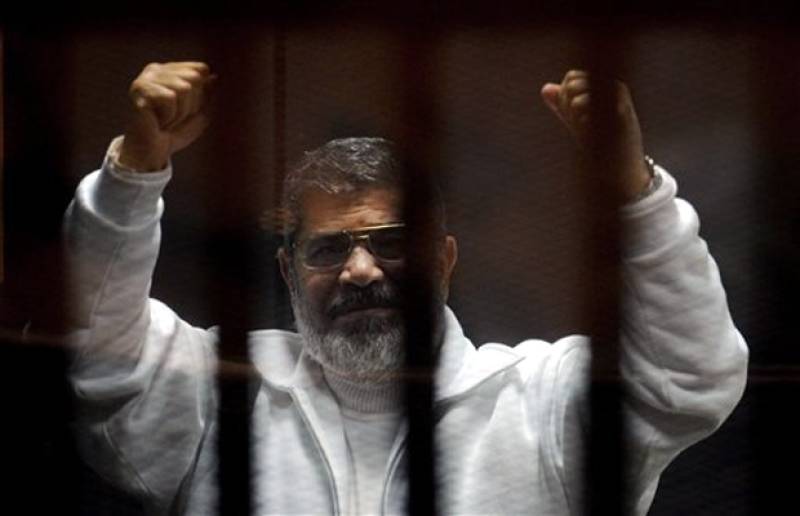 CAIRO (Web Desk) - An Egyptian court sentenced ousted President Mohamed Mursi to 20 years in prison without parole on Tuesday for the killing of protesters in December 2012, in a decision broadcast on state television.

It was the first ruling against Muslim Brotherhood leader Mursi since the army toppled him in 2013 after mass protests against his rule. The decision can be appealed.

The fall of veteran autocrat Hosni Mubarak in 2011 paved the way for what was unthinkable for decades - the Brotherhood ruling the most populous Arab country.

The man Mursi appointed army chief, General Abdel Fattah al-Sisi, toppled him in 2013 after mass protests against his rule and then launched a tough crackdown on Islamists.

Egypt’s deep state apparatus - the Interior Ministry, intelligence services and army - soon put the Brotherhood on the defensive once again.

While Mursi has become far less relevant, even within the Brotherhood, Sisi went on to become president, winning over many Egyptians who overlooked widespread allegations of human rights abuses for the sake of stability.

Western powers who called for democracy declined to use leverage against Sisi, the latest military man to seize power.

Sisi says the Brotherhood is part of a terrorist network that poses an existential threat to the Arab and Western world.

The Brotherhood says it is a peaceful movement that will return to office through people power, even though demonstrations have fallen to a trickle. Mursi, who rose through the ranks of the Brotherhood before winning the presidency in 2012, was a polarising figure during his troubled year in office.

His policies alienated secular and liberal Egyptians, who feared that the Brotherhood was abusing power.

Protests erupted in late 2012 after Mursi issued a decree expanding presidential powers - a move his supporters say was necessary to prevent a judiciary still packed with Mubarak appointees from derailing a fragile political transition. Those demonstrations led to the deaths of protesters.

Prosecutors argue that Mursi and other Brotherhood leaders had encouraged the violence and so are responsible for the bloodshed. Mursi and his co-defendants deny the charges.

The Brotherhood survived numerous crackdowns and has been able to gain support through its charities because Egyptians longed for better services under a succession of autocrats.