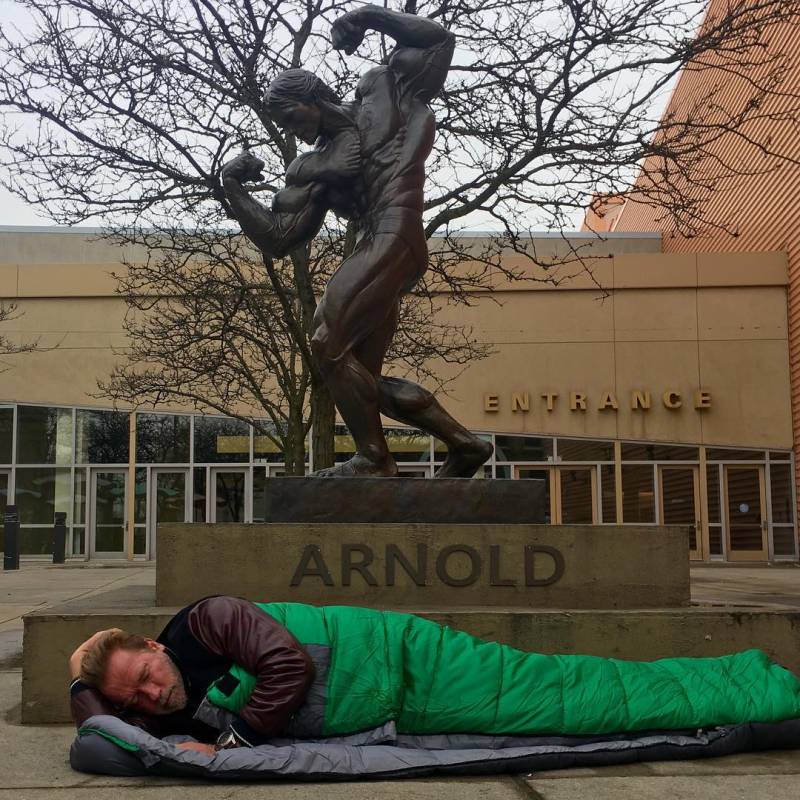 (Haider Ali) - Austrian-American actor and former professional bodybuilder Arnold Schwarzenegger became the centre of social media over the weekend when his picture showing him lying beneath his statue stumped the internet.

The picture which was posted by Hollywood starlet back in January 2016 with a caption: How Times Have Changed got the attention of social media buffs who were duped into believing a completely fake story which was well orchestrated and presented.

The fake story carried the same caption and picture and detailed that the famous actor was denied a room at the same hotel, in front of which his statue was installed.

It also stated that the governor of California who owned the hotel welcomed him at that time and the officials gave an open offer to him that Arnold could come any time to have his room reserved in his name.

The story, that was widely shared owing to the emotional element in it concluded with the line that Arnold was refused accommodation in the hotel after some time because he was not in such position of fame that led to Arnold sleep outside the same building that once honoured him.

However, with a few clicks and a knack for research, it can be easily divulged that the whole 'Hotel saga' episode was fake.

Firstly, the 8-foot-high statue, beneath which Arnold 'posed' for a picture was positioned in front of Greater Columbus Convention Center, Ohio, not any such 'hotel' as mentioned in click bait.

Secondly, the picture was posted by the famous actor himself on his Instagram handle with the caption: How Times Have Changed. Nothing else other than these four words were stated.

How times have changed.

Lastly, when it was a convention centre and 'NOT A HOTEL' how could the whole report webbed around the hotel be considered authenticated.

For those who wonder the stature and recognition of celebrated actor should know that Hollywood giant donated $100,000 to the Simon Wiesenthal Center, last week and there's simply no question of him living a miserable life.

Moreover, the actor himself served as the 38th governor of California from 2003 to 2010.

The conclusion is that everything making rounds on social media is not verified. Whenever you come across any EMOTIONAL story, do give a few minutes to Google to get it approved or debunked.

Arnold! Keep soaring high and inspire millions, We Love you and realize that you are above such hoaxes!