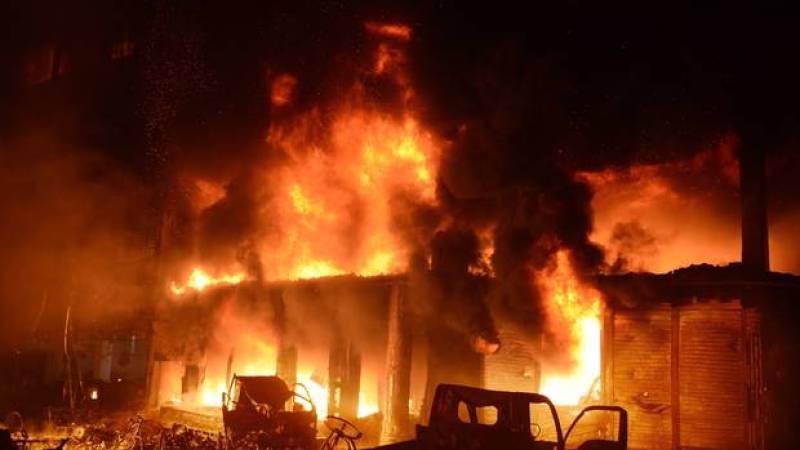 DHAKA - At least 70 people have been killed and dozens others injured as fire engulfed several buildings in Chawk bazaar district in Bangladesh's capital Dhaka, the Radio Pakistan reported.

The horrific blaze broke out on Wednesday night in a residential building that reportedly had flammable chemicals stored on one floor. The fast-moving fire rapidly spread to nearby buildings in the area.

A fire control room official told that about 69 people had been killed by the massive fire, adding to this he feared that the death toll could rise further.

The cause of the blaze was not immediately clear.

There was a huge traffic jam after the fire broke out and it spread so quickly that people could not escape from it as the streets were very narrow and residential buildings stand just centimetres apart.

The blaze began around 10.40 pm on Wednesday and more than 200 firefighters made efforts to extinguish it.

Deputy commissioner of Dhaka Metropolitan Police said that at least two cars and 10 cycle rickshaws were burned in the fire.

Television images showed firefighters climbing ladders to try to spray water on one of the buildings where the fire had largely been contained. One helicopter was also seen hovering over the area.

According to the reports at least 45 people were injured, including four who were in critical condition.

Hundreds of people rushed to the hospital to look for missing relatives.

In 2010, at least 120 people were killed in the same incident in old Dhaka building, which was also used as a chemical warehouse.

The city authorities have launched a massive crackdown on chemical warehouses in residential areas following the blaze.