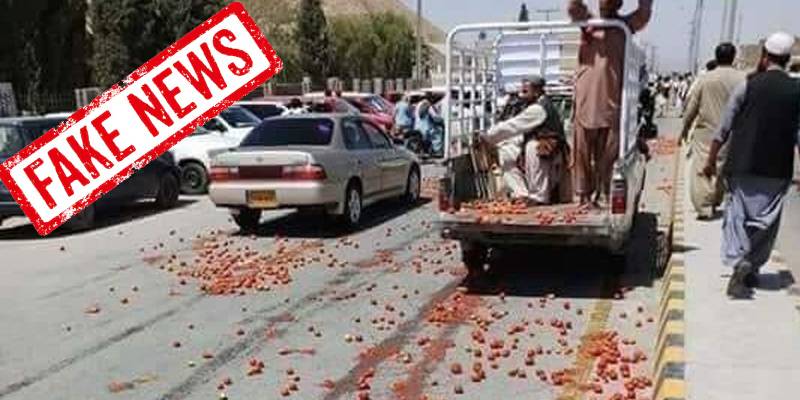 LAHORE – A video purports to be showing locals in the capital city of southwestern Balochistan province destroying tomatoes “imported from India” is an old one and dates back to 2018.

The video, which is getting viral amid the rising Pak-India tensions over the deadly Pulwama attack, is originally from Qilla Saifullah, the Balochistan district with the highest share in tomato production in the South Asian country.

In that year, growers were protesting low prices of homegrown tomatoes by throwing piles of the vegetable on roads and driving cars over them.

Soon after the attack, New Delhi imposed 200 percent duty on the Pakistani products besides withdrawing the Most Favoured Nation (MFN) status to Pakistan.

NEW DELHI – India has withdrawn the 'Most-Favoured Nation' status to Pakistan, blaming the neighbouring country for a ...

Islamabad has in turn decided to place Indian 90 items in the negative list under which import from India will immediately be curtailed by $500-600 million. Pakistan may also ban Indian items worth $600 million being exported to Afghanistan under transit trade agreement. Pakistan can impose ban on Indian exports under transit trade in the name of inspection of goods.

Under 3-4 point tit-for-tat strategy finalised by Commerce Ministry for India, however, Pakistan will not ban the import of cotton, raw material and some machinery which is vital for industry.

Pakistan has already banned imports of tomato and potato from India for the last two years in fear of disease.

Pakistan’s exports to India during the last fiscal year reached up to $484 million against imports of about $1.8 billion.