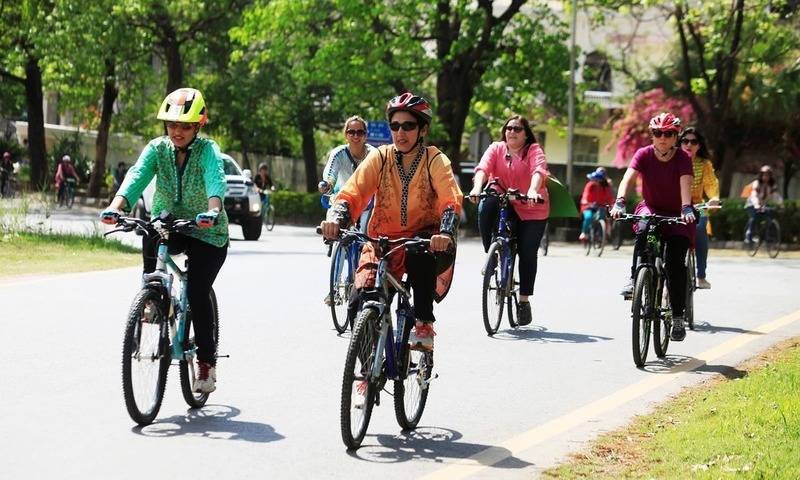 PESHAWAR - The organizers of Peshawar’s first ever women’s bicycle rally canceled the event on Friday (last week) amidst threats posed by religious parties against what they termed as an event meant to “spread obscenity”, according to reports.

The ‘peace rally’, organized by women’s rights organization Zama Jawandoon, was scheduled for January 19 and at least 35 women were set to participate in the event. Members of the transgender community were also invited to join the rally.

However, religious parties, including Jamiat Ulema-e-Islam-Fazl (JUI-F) and Jamaat-e-Islami (JI), threatened to protest against the rally for “spreading obscenity”.

Reportedly, JUI-F leader Maulana Rafiullah Qasmi, in a meeting on Thursday, announced that all relevant departments would be contacted for the cancellation of the event and if the event is not canceled, they would hold a protest demonstration against it. Amidst the threats from religious parties, the organizers decided to cancel the event.

Speaking to a private news channel, lead organiser, Wafa Wazir, said that they had obtained a no-objection certificate (NOC) from Peshawar district administration before announcing the rally and the only reason why they postponed the event is because they did not want it to take place in a state of unrest and amidst protest demonstrations.

Reportedly, the police said that they were not approached for a NOC or for seeking security and when they had contacted the organizers after being informed of planned protests, they were informed that the rally had been postponed.

Social media also reacted to the cancellation of first ever women bike rally in Peshawar.

Hence proved that only @CynthiaDRitchie is allowed to ride a bike in Peshawar.

Where are those thekaydaars of Pakistan's "positive image" now? https://t.co/n8g35jzUTD

Lol. Meanwhile local women in Peshawar did not get NOC for a bike rally. #whiteprivillage

#Peshawar’s first women bicycle rally, slated for Saturday, was indefinitely postponed by its organisers following threats of protest by local religious groups and the JUI-F and JI, who claimed it would promote “vulgarity and obscenity”. https://t.co/d8os6yQdow pic.twitter.com/4dpP1qmO7G

Really ashamed of what JUI-F zealots did to cancel the women and transgender cycle rally in #Peshawar. Women, nearly half of the population are reeling under the pressures of patriarchy. Morality is relative and you can't thrust one-sided moral values on half of the mankind.

The first women's bicycle rally scheduled to take place in #Peshawar on January 19 was cancelled after religious parties on Friday threatened to protest against the event.
The threat led the organisers to cancel the rally. pic.twitter.com/snwh9WWHkv

Women's bike rally in Peshawar gets canceled because of fragile masculinity playing the religion card but two white women say that Peshawar is safe for women. Who should we listen to ? #Peshawar

What are your thoughts on this? Share your views with us in the comments box below.