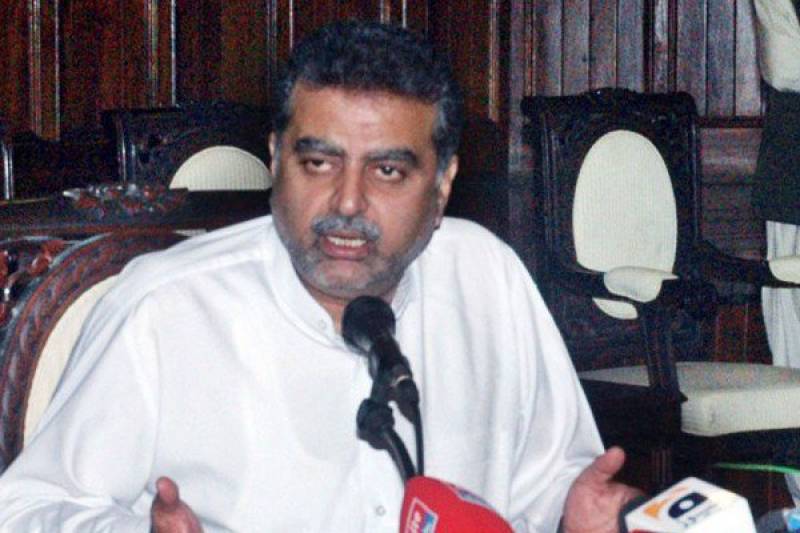 LAHORE - Zaeem Qadri, a close confidante of former chief minister Punjab, Shehbaz Sharif slammed the top guns of Pakistan Muslim League Nawaz in an explosive press conference, saying Lahore was neither the fiefdom of Shehbaz, nor of Hamza Sharif.

Addressing the news conference called in emergency on Thursday, the former minister expressed that he would contest the upcoming elections in an independent capacity for NA-133, instead of through the platform of PML-N.

'Listen Hamza! You may bring your boot polishers and contest elections but my elections is against you and I’m not your masseur,' said Qadri and clarified that his wife would too part ways with former ruling party.

To a query about Saad Rafique's efforts to convince him, Qadri replied that he was like an elder brother who struggled hard for the party.

When asked whether polishing shoe (flattering) was the only criterion for the award of tickets, Qadri replied in the affirmative.

'I will not bow down before anyone,' remarked the former provincial Minister for Auqaf in blunt remarks.

'Denial of ticket is not my problem but I would not become your employee' observed the PML-N leader.

Shaking the semblance of unity within the ranks of PML-N, Qadri warned that those who would negate his comments would be given a scathing rejoinder.

The former lawmaker also lavished praise on former interior minster Chuadry Nisar and said that he was an exceptional leader and he could not match his brilliance.

To a question about ailing Kulsoom Nawaz, Qadri expressed his prayers and remarked that had she been here in Pakistan, the issues would not have turned out like this.

He also brought in the former premier Nawaz Sharif in his press talk and said the Sharif informed him that his (Qadri's) presnece in the party was not liked by many.

He also decried that those who joined the party just recently in 2013 were made ministers.

According to well placed sources, Qadri was upset with the PML-N leadership as the embattled party has decided to field another candidate to contest polls in the constituency, NA-133.

Besides Qadri, Imran Shah and Asif Raza are also believed to be riled with the senior party leadership, prompting them to contest polls as independent candidates from PP-166 and PP-167 respectively.