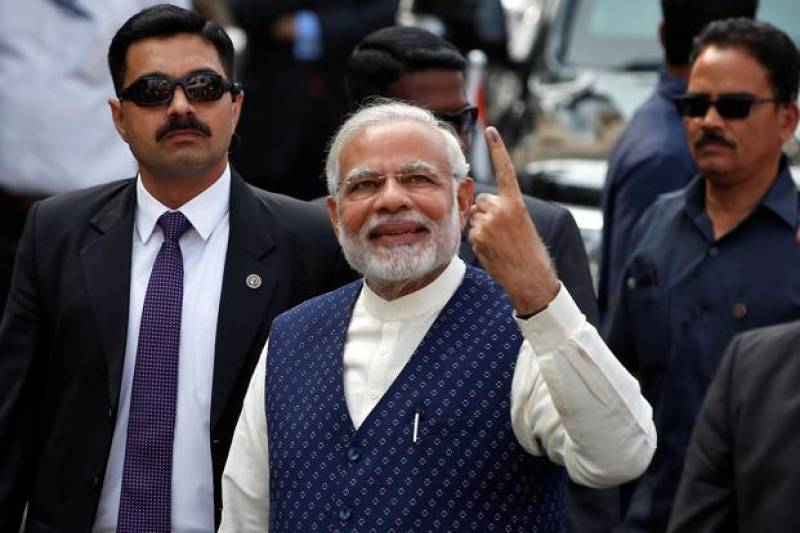 NEW DELHI - As India gears up to announce the results for general elections, allegations of Electronic Voting Machines (EVMs) being tampered with or being transported in private cars have surfaced with video clips substantiating the unusual relocation.

The voting machines were shifted in parts of Uttar Pradesh, Bihar, Punjab and Haryana ahead of the final count, prompting concerns among the opposition parties.

A mobile phone clip that emerged Monday from the Chandauli parliamentary seat shows EVMs being off-loaded and put in a room inside what appears to be a counting centre.

Supporters of the Samajwadi Party candidate in Chandauli, who filmed the video, questioned the delay about the relocation of machines.

On the other hand, the administration says the machines filmed in the video are about 35 reserve EVM units from an assembly segment in Chandauli. The officials admitted that these voting machines reached the storage room and the counting centre later but said the delay was due to "logistical issues".

According to the rules, reserve EVMs should be deposited at the same time as the machines used in voting.

Afzal Ansari and his supporters allege that there was an attempt to take out a vehicle full of voting machines while the police and the district have denied the allegations.

The apprehensions regarding EVMs are baseless. EVMs are in strong room with 24×7 CISF security. And candidates have been allowed to post their agents to monitor the strong room.

Afzal Ansari is the brother of jailed Uttar Pradesh strongman Mukhtar Ansari and his opponent in Ghazipur is Union Minister Manoj Sinha of the BJP.

His sit-in ended after the returning officer of the district assured the protestors that arrangements are in place to have representatives of the candidates at vantage points around the EVM strongrooms and that there will be complete transparency.

On the other hand, the Election Commission termed the allegations "frivolous" and said the voting machines were maintained in "proper security and protocol".

This isn't the first instance raising suspicions about the elections as last Tuesday workers of the Samajwadi Party and Bahujan Samaj Party 'caught' a mini-truck full of EVMs being taken out of the compound of a storage room in eastern Uttar Pradesh's Domariyaganj seat.

Meanwhile, the local administration also played down the allegation and said these were extra EVMs sent to them before the sixth round of voting and that they were being taken to districts voting in the seventh phase.

Similar allegations have popped up from Jhansi, Mau, Mirzapur, parts of Haryana, Punjab and Bihar but the polls watchdog denies any wrongdoing.

"All these EVMs that were being transported. There were no unknown persons involved. In Jhansi, a city magistrate was there. In all other instances a Sub Divisional Magistrate and tehsildar were in the know and were taking these EVMs. No unauthorised vehicle or person was involved," Uttar Pradesh's Chief Electoral Officer Lakku Venkateshwarlu said.

The allegations have emerged just ahead of a meeting of 21 opposition parties, including the Congress, with the Election Commission this afternoon to express their concerns about Electronic Voting Machines and the VVPAT (Voter Verified Paper Trail Machines).

India would be counting the votes on Thursday; it would announce the results on the same day.