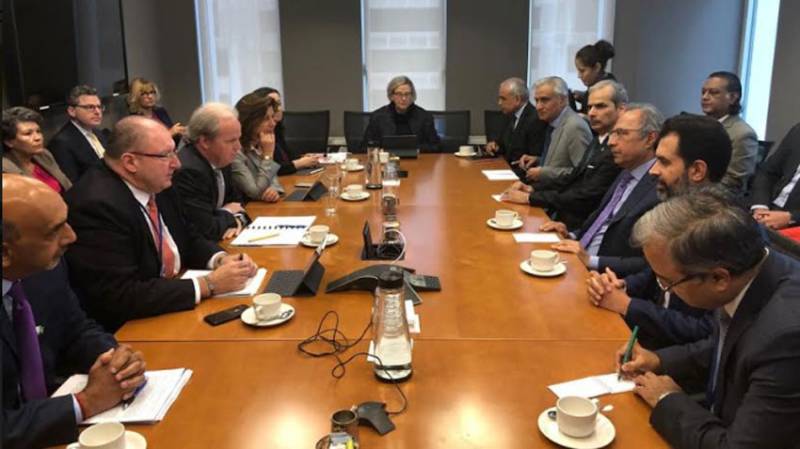 ISLAMABAD - The International Monetary Fund (IMF) and the World Bank (WB) have assured of their continued support to Pakistan’s development efforts and economic reform process undertaken by the government.

Adviser to the Prime Minister on Finance and Revenue Dr Abdul Hafeez Shaikh and his team were in Washington DC to attend the annual meetings of IMF/WB-2019.

They held back to back meeting with the managing directors of the World Bank (WB) and the International Monitory Fund (IMF) to apprise them of the institutional reforms and steps undertaken during the last year to put the economy on the path to progress and stability.

In the first meeting, Dr Abdul Hafeez Shaikh and the Pakistan delegation held a meeting with World Bank Managing Director, Axel Van Trotsenburg and other and senior officials of the bank, according to a press statement issued by the Finance Ministry here Monday morning.

The Adviser congratulated the new MD on his appointment and appreciated the support being provided by the World Bank to Pakistan.

He highlighted the government’s focus on expediting the speedy rollout of the World Bank pipeline of projects and actions being taken in this regard.

Trotsenburg mentioned that Pakistan was among the World Bank’s largest partners and beneficiaries of the International Development Association (IDA) besides making optimal use of available World Bank resources.

He assured the Bank’s continued support to Pakistan’s development effort, the statement added.

In a separate meeting, the Adviser and the Pakistan delegation had an extensive session with the IMF Managing Director Ms Krsitalina Georgieva and other senior Fund officials.

Dr. Shaikh congratulated the new MD on her appointment and gave an overview of the implementation of the IMF program in Pakistan.

He stated that the first quarter results indicated that Pakistan’s economy was on its path to stabilization, adding the reforms initiated under the IMF program were demonstrating positive outcomes.

Ms Georgieva stated that the IMF recognized that tough decisions were being made and implemented to stabilize Pakistan’s economy.

She appreciated the commitment of the government and assured continued support of the IMF for the reform process.