Most Asian markets up, Tokyo at 15-year high 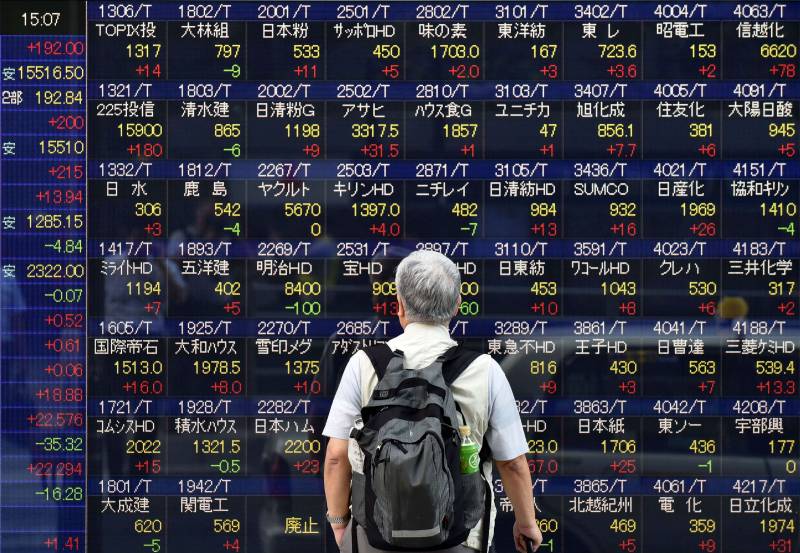 HONG KONG (APP) - Japanese shares hit a 15-year high Wednesday after the country recorded its first trade surplus in three years, while the euro weakened on growing concerns that Greece will not reach a bailout reform deal with its creditors.

With few catalysts to spur business in Asia, other markets were mostly higher despite a broadly negative lead from Wall Street.

Tokyo's Nikkei broke back through the 20,000 point barrier -- after briefly clearing the hurdle earlier this month -- as the yen slipped against the dollar.

Before the market opened the finance ministry said March saw the country enjoy its first trade surplus since June 2012 thanks to tumbling oil prices and a boost in exports.

However, economists warned the positive results might not last.

"We expect the yen to weaken further in coming months, which should lift the cost of imports by more than the yen-value of exports," Marcel Thieliant at Capital Economics wrote in a commentary.

The dollar's strength comes despite the diminishing likelihood of a US rate hike by the US Federal Reserve soon.

"More and more the expectation is that the Fed won't do anything soon. The momentum in equities is still there," Evan Lucas, a markets strategist at IG in Melbourne, told Bloomberg News.

The euro slipped as investors nervously follow events in Europe as Greece struggles to scrape cash together to pay its bills.

Athens is facing a backlash from the country's mayors after it issued a decree ordering them to hand over their reserves in order to service its debts and pay wages.

The government is locked in negotiations with its international creditors on unlocking some billions of euros in much-needed bailout funds. Failure to secure the cash will likely see it default and possibly crash out of the eurozone, which analysts fear could have global repercussions.

The next focus for investors is the release Thursday of HSBC's preliminary report on activity in China's manufacturing sector, which will give the latest indication about the state of the world's number two economy.