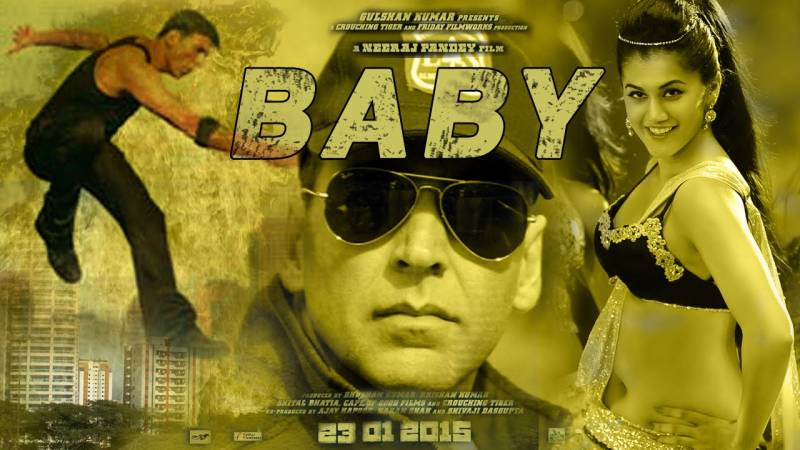 LAHORE (Web Desk) - Akshay Kumar, known for his action sequences, is back with yet another similar movie, Baby. However, it has been speculated that the movie has anti-Pakistan sentiments and hence, has been banned by Pakistan’s Film Censor Board.

This is not the first instance where our local censor board has banned such movies. Previously, movies like Ek Tha Tiger, Agent Vinod and recently released, Haider had been banned for similar reasons too.

The difference, this time though, is that the movie has Pakistani star cast in major roles in the movie. One of Pakistan’s most popular actor, Mikaal Zulfiqar and another talent, Rasheed Naz, who had previously played a villainous role in the hit movie Khuda kay Lye, are part of the upcoming Indian movie, Baby.

In response to Pakistan banning the movie, Akshay Kumar along with the director of the movie, Neeraj Pandey, has defended the movie saying it is not anti-Pakistan at all. While talking to the media, Kumar was quoted saying, “Baby does not show Pakistan in bad light.” On the other hand, the director went ahead to explain how they believe religion and country are not the same thing, “Baby is not an anti-Pakistan film. In fact, it has three Pakistani actors who play very important roles. See, some ¬elements in Pakistan can be wrong but a whole nation cannot be wrong. Terrorism has no religion, and we believe that religion and country are two different things.”

Other star cast for the upcoming action thriller includes Anupam Kher, who praises Akshay Kumar’s performance in the movie, “This is one of Akshay’s best performances so far!”

Talking about his own performance in the movie, Kumar appreciated the realistic effects of the sequences, “Neeraj has a thing for logical things, so all my fight ¬sequences are very believable. For my film Holiday last year, I performed stunts that went a little overboard, but keeping Hindi cinema in mind, we had to do them.”

The action star plays the role of a secret agent in the movie while the Pakistani actor, Rasheed Naz, plays the character of a religious leader, who is heading a terrorist organization from outside India and planning attacks on the country. The inspiration for this character is said to be taken from a “chief of a recently banned outfit in Pakistan who is known for anti-India speeches.”

Baby is all set to release globally on 23rd January 2015, while the Film Censor Board of Pakistan will decide on its fate today.