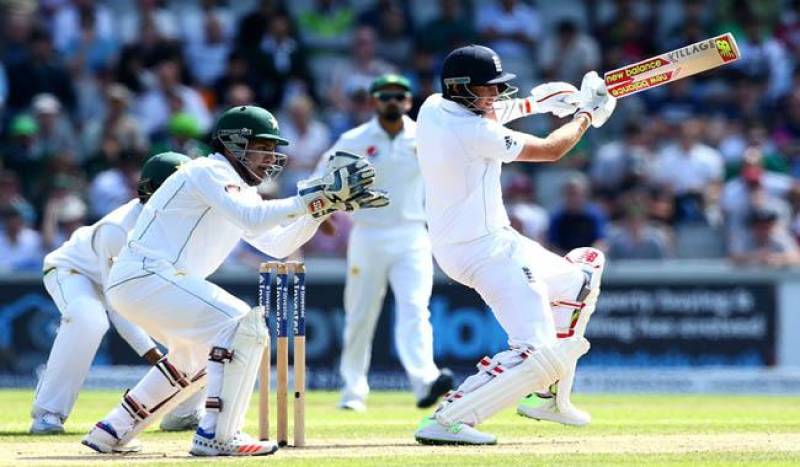 MANCHESTER: Alastair Cook and Joe Root overcame the early loss of Alex Hales to leave England well-placed on 95 for one at lunch on the first day of the second Test against Pakistan at Old Trafford on Friday.

Cook was 40 not out and Root unbeaten on 41, with the hosts looking to bounce back from losing last week´s first Test at Lord's.

So far, England's second-wicket partnership has been worth 70 runs after Hales was bowled by a superb Mohammad Amir delivery for 10.

Predictably, there were a few jeers as Amir prepared to bowl the first ball of the match.

Amir, who took the last wicket in Pakistan's win in the first of this four-Test series, saw his first and second deliveries edged through gully for four by Cook.

Amir, one of three left-arm pacers in Pakistan's attack alongside Rahat Ali and Wahab Riaz, had Hales dropped in the gully on six by Asad Shafiq, as the ball sped away to third man for four.

But three balls later, having repeatedly moved the ball away from Hales, Amir skilfully swung the ball back into the right-handed opener.

The delivery also cut off the seam a touch and knocked over Hales´s middle and off stumps, leaving England reeling at 25 for one after seven overs.

Leg-spinner Yasir Shah, England's tormentor-in-chief at Lord's with 10 wickets, saw his second ball on Friday cut in front of point by Root for four. That shot brought up England's fifty in 92 balls with 10 boundaries.

Root, in the manner of Yorkshire and England great Geoffrey Boycott, forced both Wahab Riaz and Amir through cover-point off the back foot for fours as he and his skipper looked to make the most of an even-paced pitch in sunny conditions ideal for batting.