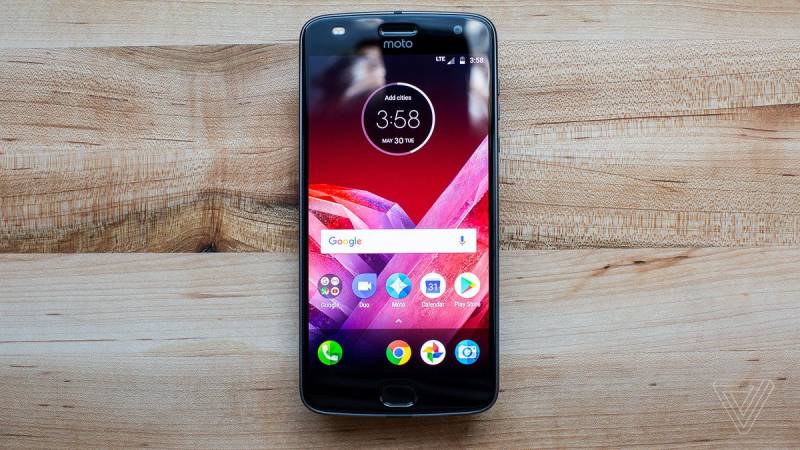 Moto Z Play is no more the smartphone with a legendary battery life as it was only last year. Don’t be mistaken by assuming that competitors outsmarted it. The affordable mid-ranger supported by the pin-connection modularity fell from grace after Motorola decided to shrink its battery life by a whopping 15 per cent while bumping up the price.

The Z2 may be weaker than its previous version on the talk-time front but it still is a really impressive smartphone. The back panel has been upgraded to matte metal from the scratch-prone mirror finish, thus it also looks better in reality than in photos. In fact, it sits a lot classier, mostly because of Motorola slimming 1mm from the chasse doesn’t seem much but makes a big difference, but critically speaking, many prefer a slightly thicker phone with a larger battery life than a 1mm reduction in size, which would also eliminate the huge camera bump at the back. However, there is no reason to complain: this phone routinely has 20% battery left after a 16-hour long day of heavy usage.

Looking at its pictures for the first time, one would wonder why the Z2 has those oddly shaped pins at the bottom. Well, that’s where the ‘Moto Mods’ come in. Spend an extra $80 and you can pick up a turbo mod that roughly doubles the battery life. This phone is no joke. With the turbo mod, an hour of Google maps navigation, two hours of web browsing and a whole afternoon of shooting almost constant photos and video, the phone had 80% battery left in itself and 35% in the mod at the end of 14-hour use.

The Moto Mods are a really big part of the smartphone, three of which have been upgraded for 2017. Thankfully, Motorola stands up to its promise on compatibility. The 2016 mods support the Z2 play and the 2017 mods lock on to the older Z phones just fine as well. At the moment, there are over seven mods for the phone, namely: JBL sound boost mod, JBL sound boost 2 mod, Tumi battery mod (2016), turbo batter mod (3490 mAh), the projector, the Hasselblad camera mod and the several back panels Motorola offers at their website. As convenient as these mods are, these are not compatible with any other devices aside from the Z line-up. And, one can buy a normal alternative to these mods for much cheaper. For instance, you can find battery banks 5-times the capacity of the turbo pack for half the price.

As for the software, Motorola is just so good at improving Android where it lacks. For example, Moto Display comes to life by waving your hand over the screen or a pocket pull, and it lets you to take quick actions too, like replying to text messages without unlocking the phone. The new fingerprint sensor is much faster and also has been enlarged from last year to accommodate Motorola’s one-button navigation (nav), which lets you use swipes and taps to navigate the OS. It definitely feels weird at first but after a while one gets used to it. Motorola retains its iconic ‘chopping-for-flash’ and ‘torqueing-for-camera’. And with all these features, going back to a normal button seems dull to say the least. Motorola definitely knows how to please its customers. Last but not the least, it also keep up with its great track record for timely updates because of the near stock Android skin.

Lots of folks still think that a 600 series snapdragon chip somehow guarantees a slow experience; the Z2 (snapdragon 626) proves them wrong. The phone has 3/4 GB of LPDDR3 RAM, a 5.5 AMOLED display, 12MP camera with neither bad nor good picture quality and poor low light, a 5MP front camera with flash, 3000 mAh battery and expandable 32/64 GB storage via microSD, and yes, it has a headphone jack even in this super-slim chasse.

The phone isn’t excellent of course: the screen is only FHD, the camera gets an overall 4/10, the 15-watt charger is slow, taking two hours to go from 0% to 100%, and water proofing/resistance would’ve been a nice feature. Under Lenovo, Motorola is gradually slowing down its android update schedule for unknown reasons.

This phone definitely packs a punch with its modular design, making it different from the normal Chinese phone which are taking over the Pakistani market. This phone is a big competitor for competing mid-range phone manufacturers like ZTE and One Plus.

This phone is a nice choice, coming from an experienced brand with a lot of features, yet having minimal tweaks on android. However, the $100 price bump from last year for the Moto Z2 ($500 for 32GB ROM and 4 GB RAM) seems less of a winner when compared to the One Plus 5 ($500 for 128GB ROM and 8 GB RAM). The Moto Z2 would be the first choice for those looking to for a clean android phone.