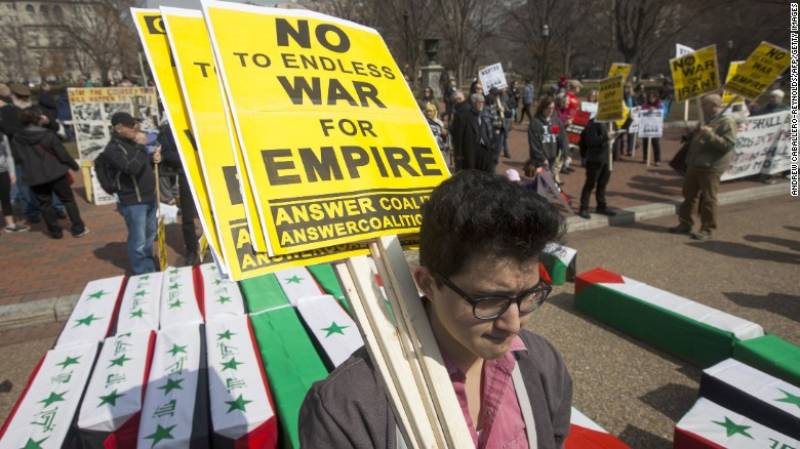 WASHINGTON (Web Desk) - Hundreds of protesters on Saturday marked the 12-year anniversary of the start of the Iraq War by rallying in front of the White House and then marching to the Capitol, rejecting an "endless war."

The group carried mock coffins, dropping them off in front of the White House and near lawmaker offices at the Russell Senate Office Building near the Capitol. Along the way, they also dropped coffins in front of various defence contractor offices.

The "Spring Rising" event was organised by the Answer Coalition, which characterized the rally as "an antiwar intervention."

Speakers at the rally expressed concern about US military involvement in Afghanistan and Iraq, its drone strikes in Pakistan, Yemen and Somalia, and its "provocation" in Russia, Ukraine and Eastern Europe. The assembled warned against war with Iran.

The United States and its allies are negotiating a possible deal with Iran to curb its nuclear program. If such a deal is not reached, the United States has not completely ruled out a future military strike to prevent the Iranian regime from developing a nuclear weapon.

One of the event's key organisers, activist Cindy Sheehan, told CNN that President Barack Obama has expanded the US war footprint “to more countries than even former President George W Bush.”

“With the new authorisation to use military force being requested by the President to Congress, it was urgent to come to Washington, DC. We're in opposition to that," said Sheehan, who was a leader of the opposition to the Iraq War. Her son Casey, an Army specialist, died in 2004 while serving in Iraq.

The group was peaceful, and there were no arrests.