Who will be the next Pakistan Army chief? 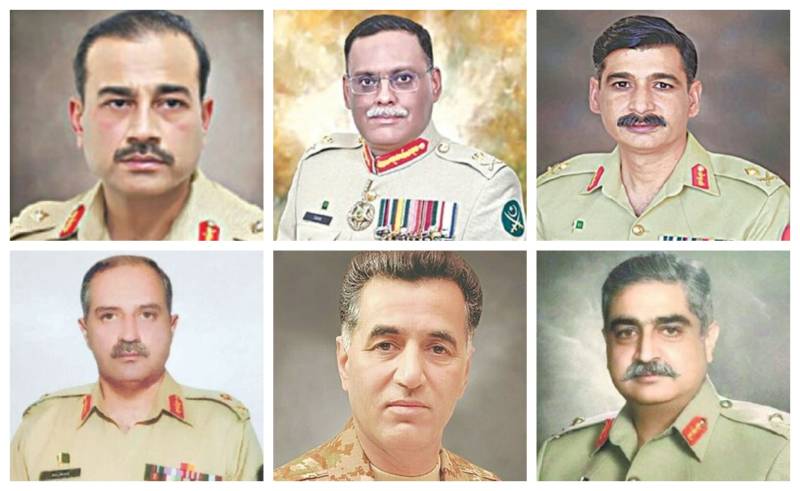 ISLAMABAD – The process of appointment of the highest position in Pakistan Army has been started and expected to be completed by November 25, said Defence Minister Khawaja Muhammad Asif on Monday.

General Qamar Javed Bajwa, who has been serving as the Chief of Army Staff (COAS) since 2016 and received an extension in service in 2019, is all set to retire on November 29.

As per the traditions, the General Headquarters (GHQ) sends a list of the senior-most lieutenant generals to the defence ministry, which later forwards a summary to Prime Minister Shehbaz Sharif.

The premier then pick a name for the top post in consultation with president.

Schedule V-A of the Rules of Business, which explains the cases to be presented to the prime minister for his approval, states that: “[…] the appointment of, and above the rank of, lieutenant-general in the army and equivalent ranks in the other Defence Services will be made by the prime minister in consultation with the president.”

Lieutenant General Syed Asim Munir is the senior most officer after outgoing Army Chief Qamar Javed Bajwa and is currently serving as Quartermaster General in the Pakistan Army.

Lt-Gen Munir entered the service via the Officers Training School (OTS) programme in Mangla and was commissioned into the 23rd Battalion of the Frontier Force Regiment.

Lt-Gen Munir commanded troops in the Force Command Northern Areas as a brigadier under Gen Bajwa, who was then Commander X Corps. He was appointed DG of the Military Intelligence in early 2017 and then ISI Director General in October 2018.

Despite his retirement due on November 27, Lt-Gen Munir is one of the top contenders for the coveted post of Pakistan's next Chief of Army Staff (COAS).

Lieutenant General Sahir Shamshad Mirza is a three-star general in the Pakistan Army who is currently serving as a commander for Rawalpindi Corps.

The recipient of Hilala-e-Imtiaz (Military) has served at senior leadership positions in his career, including director-general military operations (DGMO), Chief of General Staff, and Adjutant General at the General Headquarters. During his assignment at Military Operations, he also commanded 40th Infantry Division in Okara.

As DGMO, he was part of former COAS General Raheel Sharif's core team at the GHQ, which supervised the military operation against the Tehreek-i-Taliban Pakistan (TTP) and other militants in North Waziristan.

He has also served in United Nations-led operations in foreign countries and was conferred with UN Medal for Service in Sierra Leone (UNOMSIL Medal).

Mirza was commissioned in the 8th Battalion of the Sind Regiment as second lieutenant in 1985. In 1988, he was promoted as lieutenant and became Captain in 1991.

He was promoted to the rank of lieutenant general in 2019.

Lt Gen Abbas is a three-star ranking general in the Pakistan Army and has been serving as the 35th Chief of General Staff (CGS) since September 8 2021.

As Chief of General Staff, Lt Gen Abbas is responsible for operational and intelligence matters at the GHQ in Rawalpindi. Abbas was commissioned in the 41st Battalion of Baloch Regiment.

Previously, he served as Commandant School of Infantry and Tactics in Quetta, headed a division in Murree, worked as a Brigadier in the Operations Directorate, and was also a Private Secretary to the former COAS General Raheel Sharif.

Lt Gen Mehmood also belongs to the Baloch Regiment and is currently president of the National Defence University (NDU). He has served as chief instructor at the Command and Staff College, Quetta.

He has commanded an infantry division based in North Waziristan before being posted as director-general (Analysis) at the ISI.

In 2019, he was promoted as a three-star general and was appointed inspector-general of Communications & Information Technology, GHQ.

In December 2019, he was appointed Corps Commander Peshawar where he oversaw security along the Pakistan-Afghanistan border and its fencing at a time when the US withdrew its forces.

In November 2021, he handed over command of the XI Corps to Lt-Gen Faiz Hamid.

Lt Gen Hamid, too, belongs to the Baloch Regiment and he is currently serving as Bahawalpur Corps Commander. Previously, he served as commander of the Peshawar Corps for less than a year.

The three-star ranking general has served as the 24th Director General of the ISI and as GOC 16th Infantry Division Pano Akil.

Previously, he was adjutant-general at the GHQ. As major-general, he headed the 10 Infantry Division stationed in Lahore from 2017-18. He has also served as director-general Staff Duties at the COAS Secretariat. Prior to that, he was military secretary to then President Asif Zardari from 2011-13.