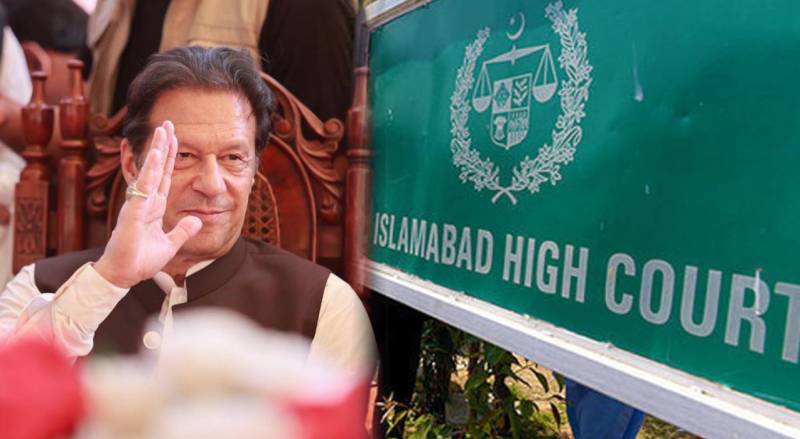 ISLAMABAD – The Islamabad High Court has deferred contempt proceedings against former Pakistani PM Imran Khan after the defiant politician expressed willingness to apologize to Additional District and Sessions Judge Zeba Chaudhry for his remarks in the Islamabad rally.

Earlier, the PTI chief reached Islamabad High Court for indictment in the contempt of court case registered against him for threatening Additional District and Sessions Judge Zeba Chaudhry.

During the hearing, the former premier was called to the stand and before the judge read the charges, Khan's lawyer said that his client wants to say something to the court.

As the court allowed PTI chief, he mentioned that he never intended to commit contempt of court, saying he sat through two hearings and wanted to say something earlier but did not get the opportunity.

Khan said he is willing to go to the judge and apologize for his remarks,the court then allowed PTI chief to submit an affidavit so that it can be included in their decision.

In its written order, the high court has expressed his satisfaction over Imarn Khan’s reply and directed him to submit a written affidavit for what he said during the hearing.

“We are, prima facie, satisfied with the apology rendered by the respondent. Let him file an affidavit for consideration of this court before the next date fixed,” the order read.

The court recorded Khan’s statement and adjourned the hearing till October 3 without framing charges against him.

The outspoken politician earlier dodged questions while speaking informally to media person. He also expressed his surprise at the heavy presence of law enforcers, saying it was difficult to even enter the premises.

Khan engaged in multiple legal problems as he threatened cops and even a female judge who approved a detention order against his close aide Shahbaz Gill.

On Wednesday, IHC issued a circular regarding the code of conduct for the court appearance of the PTI chief, and entry into court number 1 shall be subject to a pass issued by the registrar's office.

Imran’s legal team, law officers from the attorney general and advocate general office, three court assistants, and court reporters will only be allowed to be present in the courtroom.

KARACHI – Former prime minister Imran Khan warned on Saturday that any attempt to harm him would harm those who ...

Earlier this month, the court had dismissed Khan’s reply in the case, maintaining that he did not offer an apology to the court.

Khan, on the other hand, said his words were not meant to hurt the feelings of female Judge and if her feeling have been hurt, it is deeply regretted.