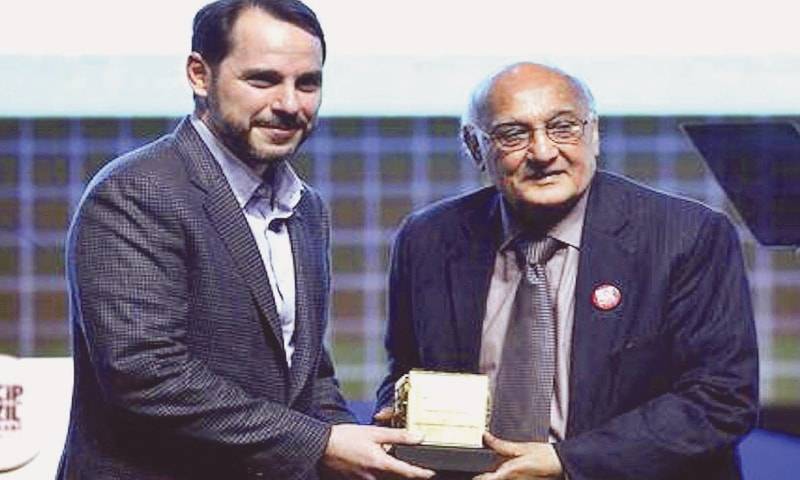 The Turkish president, on the occasion, said that Amjad was one of the noted poets of modern Urdu literature and a prominent figure from Pakistan, who apart from literature, had a career in journalism and scriptwriting.

About the close brotherly ties between Turkey and Pakistan, he said the relationship between the two countries was based on mutual benefits. Turkey-Pakistan friendship was exemplary for the entire world as it was based on sincerity and solidarity, he added.

President Erdogan said that the heart-to-heart Turkey-Pakistan brotherly ties would be further strengthened in the future.

Pakistan's distinguished literary figure Amjad Islam Amjad was selected by the Award jury for his contribution in creating a remarkable impression in the literary and artistic world.

In his speech, Amjad thanked the jury for considering his works for the prestigious award and said Turkey was close to their hearts.

He said receiving this award in presence of Turkish President Recep Tayyip Erdogan was a great honour. "I consider Erdogan as the greatest leader of the Muslim world in present times," he said.

He hoped to see a translation centre of Muslims and third world countries for a better understanding of their common and mutual problems.

Separately, felicitating him, Ambassador Syrus Qazi said that the Nacip Fazil Award was an acknowledgement of Amjad Islam's outstanding contributions in the literary field.

He also highlighted the depth of love, affection and respect among the Turkish people and leadership for Pakistan and its people.

The Awards are organized to honour the cultural and literary heritage of the idealist, poet and thinker Necip Fazl who was one of the great poets of Turkey. His poetry, fiction and political writings had a profound impact on the new generations of Turkey.