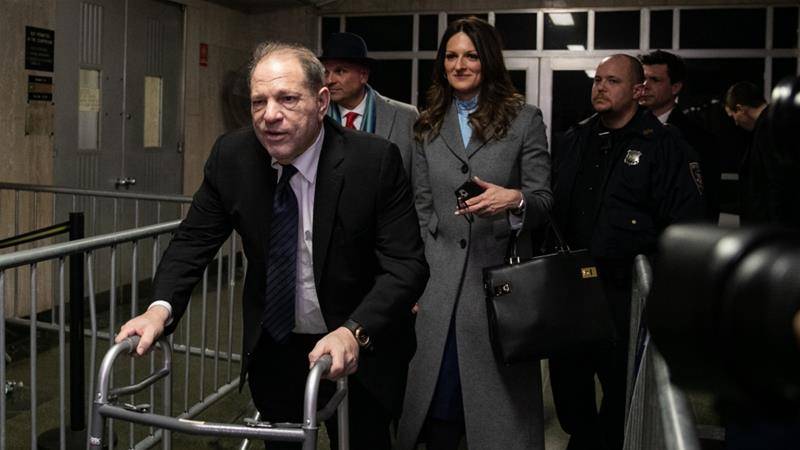 NEW YORK - Prosecutors on Monday portrayed former Hollywood producer Harvey Weinstein as a serial predator who used his power to manipulate and sexually assault young women, while the defense argued that his accusers engaged in consensual sex that they later reframed as attacks.

During opening statements in the high-profile rape case, New York prosecutors accused Weinstein of committing violent attacks on aspiring actresses who suffered shame and humiliation as they internalized trauma from the encounters.

Defense attorneys countered that emails from the accusers to Weinstein would show they maintained warm relations, which could undermine a case that appears to rely primarily on the testimony of the accusers. Weinstein, 67, has pleaded not guilty to charges of assaulting two women, Mimi Haleyi and Jessica Mann. He faces up to life in prison if convicted of the most serious charge, predatory sexual assault.

The trial is a watershed moment for the #MeToo movement, in which women have gone public with allegations against powerful men in business and politics.

“The man seated right there was not just a titan in Hollywood, he was a rapist,” said Assistant District Attorney Meghan Hast as Weinstein looked on from the defense table.

She described in detail Weinstein’s alleged attacks on former production assistant Haleyi and actress Mann, as well as on actress Annabella Sciorra. Sciorra’s allegation is too old to be the basis of a separate charge but is being used by prosecutors to establish a pattern of serious sex crimes against multiple women.

Sciorra is expected to testify on Thursday, according to Weinstein’s spokesman, Juda Engelmayer. The Manhattan District Attorney’s office declined to comment.

Hast told a jury of seven men and five women that Weinstein manipulated women with promises to open doors in Hollywood, coaxing them to hotel rooms or private apartments and then overpowering and violently attacking them.

One female juror seemed to wince at the graphic details, involving Hast and Weinstein.

Weinstein’s lawyer, Damon Cheronis, said the evidence would show that consensual interactions were being relabeled as attacks.

Haleyi reached out to Weinstein multiple times after the alleged assault, including once to “reminisce” about their time together in 2006, Cheronis said.

The lawyer said Mann repeatedly sought out Weinstein’s company and told the producer she loved him and even wanted him to meet her mother.

“While the narrative they painted for you is one that may reinforce your preconceived notions, it’s not the truth,” Cheronis told jurors.”You don’t call Harvey Weinstein a predator in 2020 when you want to introduce him to your mother in 2015,” he said.

Hast cautioned jurors that rape isn’t a “back-alley” attack at the hands of a stranger. She promised to bring in an expert to explain that victims are often assaulted by someone they know and do not report the crime. Victims even “reach back out to their attacker,” she said.

Since 2017, more than 80 women, including many famous actresses, have accused Weinstein of sexual misconduct.

Weinstein, who reshaped the independent film industry with critically acclaimed pictures such as The English Patient and Shakespeare in Love, has denied the allegations and said any sexual encounters were consensual.

Justice James Burke told potential jurors last week that they must decide Weinstein’s case based on the evidence and not make the trial “a referendum on the #MeToo movement.”

The trial began on Jan. 6 and could last about six more weeks.

Regardless of the outcome of the trial, Weinstein faces additional charges in California.

Los Angeles District Attorney Jackie Lacey announced on Jan. 6 that Weinstein had been charged with raping one woman and sexually assaulting another in 2013.