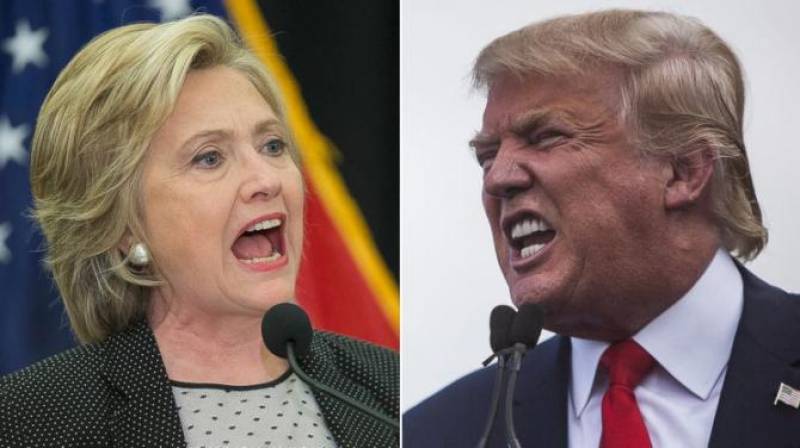 NEW YORK: Donald Trump and Hillary Clinton came to bitter blows on Wednesday, labeling each other as unfit for office and delivering rival pitches to middle America in readiness for fierce competition ahead of the presidential elections in November.

With unfavorability ratings shooting well past the crucial 50% mark, both candidates are among the most loathed US presidential candidates in history with Clinton’s unpopularity bested only by the public's even greater distaste for the New York billionaire.

And in this week's campaigning, both candidates tried to make the other seem more untrustworthy and unpopular than themselves.

Republican White House hopeful Trump kicked off the day by calling his likely Democratic opponent a “world-class liar” and decrying her “disgraceful” record on trade, foreign policy and immigration.

Clinton, who is determined to make history as America’s first female commander-in-chief, ridiculed Trump only hours later, calling him a “self-proclaimed king of debt” with a “hollow sales pitch” that could bankrupt the US economy if implemented.

US elections often hinge on a handful of swing states, leaving the candidates battling to win over independents and undecided voters. This year, both Clinton and Trump will be vying to secure some of the passionate supporters in Democratic socialist Bernie Sanders' camp.

“Hillary Clinton may be the most corrupt person ever to seek the presidency,” declared Trump in a speech. The speech signalled a new tone in his campaign, making a pitch to all Americans and toning down the offensive against Muslims.

The 70-year-old Trump painted himself as an innovative thinker who would protect working Americans from a system rigged against them by career politicians such as Clinton.

Clinton, on the other hand, impressed upon voters the strength of her credential. She said that she alone had the policies to get things done. She also denounced special interest groups and Wall Street influence, and vowed to fight inequality and create new jobs.

However, Trump played on Clinton's perceived lack of trustworthiness in response, accusing her of running “the State Department like her own personal hedge fund — doing favors for repressive regimes, and many others, in exchange for cash.”

Trump even sensationally alleged that the US ambassador to Libya, Chris Stevens, who died in an attack on the consulate in Benghazi in 2012, was one of the victims of her decisions.

“He was left helpless to die as Hillary Clinton soundly slept in her bed,” he said. “Her decisions spread death, destruction and terrorism everywhere.”

Yet, the 68-year-old Clinton was not to be outdone.

“Donald hates it when anyone points out how hollow his sales pitch really is, I guess my speech yesterday must have got under his skin,” she hit back, during a rally in Raleigh, North Carolina, a largely Republican state, .

Reports filed this week with the Federal Election Commission show that Clinton has a whopping $42 million in donations while Trump has just $1.3 million, exacerbating weeks of speculation that his campaign is unraveling.

Trump assailed Clinton’s support for trade deals, saying they had cost the country nearly a third of its manufacturing jobs and that the trade deficit with China had soared by 40 percent while she was secretary of state.

Clinton countered that Trump had “no credible plan for rebuilding infrastructure” and “no real strategy for creating jobs… just a string of empty promises.”

Besides assailing Clinton, Trump used his speech to row back from months of offensive remarks against Muslims, whom he has said should be banned from entering the United States in the wake of terror attacks at home and overseas.

He said the Islamic State group in Syria had victimized “peaceful Muslims across the world… who only want to raise their kids in peace and safety.”

Clinton defended her family’s Clinton Foundation against attacks from Trump, saying it had saved the lives of people around the world.

“Donald Trump uses poor people around the world to produce his line of suits and ties,” she countered.

While Clinton had an eight-point lead over Trump in Florida, a poll published Tuesday by Quinnipiac University put the two rivals each on 40 percent in Ohio and Clinton on 42 percent and Trump on 41 percent in Pennsylvania.