Terrorism is the biggest threat to peace in the world: President 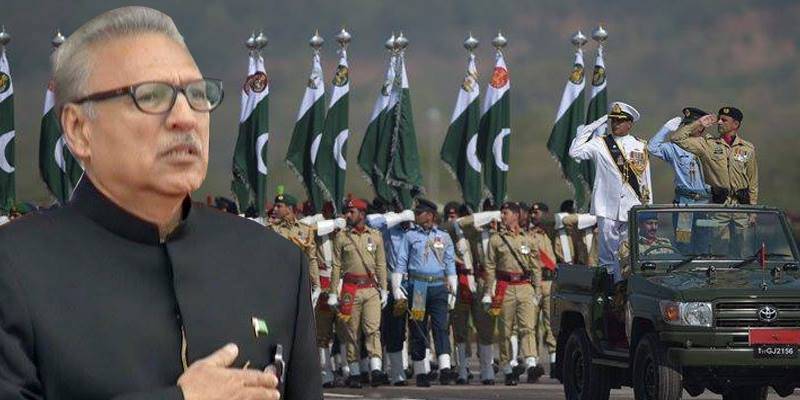 ISLAMABAD - President Dr Arif Alvi said that Pakistan believes in peaceful co-existence but its desire for peace should not be misconstrued as weakness.

While addressing the Pakistan Day joint military parade, the president congratulated the nation and said, "March 23 is that milestone of our national history in which Muslims of the subcontinent aimed for their liberation through Pakistan Resolution."

He said further that Independence demands sacrifices. We suffered the loss of lives and finances in the ‘War on Terror’ but today Pakistan is an upcoming economy.

ISLAMABAD - The nation is celebrating Pakistan Day today (Saturday) with a commitment to ensure progress, prosperity ...

In his address, he said Pakistan is a responsible nuclear state but it wants peace, not war. He said Pakistan respects integrity and sovereignty of other states.

"Instead of wars, we should focus on providing health, education and employment. Our real war is against unemployment and poverty," he said.

The president said that responding to Indian aggression was our right. Through our plan of action, we responded to India immediately and effectively. "We responded to the enemy befittingly," he reiterated.

He regretted that India's attitude was irresponsible, he added that "After the Pulwama attack, India blamed Pakistan without any evidence.

ISLAMABAD - A Military parade to mark 79th Pakistan Day is underway in Islamabad on Saturday. The Pakistan Day military ...

"Terrorism is the biggest threat to peace in the world. Peace in Afghanistan is necessary for everlasting peace in Pakistan," he added.

President Alvi said Pakistan's "sovereignty had been challenged in the past and wars were imposed on us" but the nation fought back.

The President said India's irresponsible attitude has jeopardized peace in the region. He said India will have to accept Pakistan as a reality, and it must come to the conclusion that dialogue is the only way to resolve issues.

The President said we are a peaceful nation but are not oblivious to our defence, and the same has been proved in the recent demonstration of Pakistan's defence capability.

He said the country is safe and moving on the path of progress and development after effectively combating the menace of terrorism.

The President said the participation of the representatives of Pakistan's friendly countries including Saudi Arabia, China, Turkey, Azerbaijan, Bahrain and Sri Lanka has added valour to today's military parade, and this signifies Pakistan's friendship with these countries.