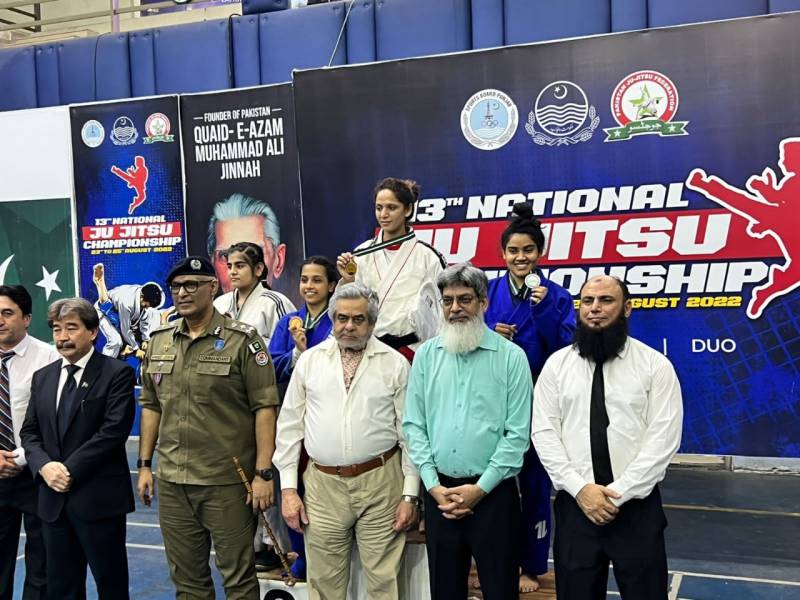 On the second day of the national championship, the matches were conducted in 12 categories and Wapda players once again excelled by winning 7 more gold medals to take their tally to 11 golds. Punjab and Navy jointly earned the second position with total four gold medals each while Police secured total two gold medals for the third position. A large number of ju-jitsu enthusiasts and sports lovers were there to cheer their favourite teams.

At the end of the second day’s matches, a prize distribution ceremony was conducted which was graced by IOC Member in Pakistan Syed Shahid Ali as chief guest, who gave away prizes and medals to the winners of different categories. He lauded the winning players for their efforts and hard work that led them to earn gold medals while he also encouraged the losing ones, urging them to work harder and improve their games, saying soon they will also be on the podium.

Syed Shahid also appreciated the efforts of Pakistan Ju-Jitsu Federation and especially its president Khalil Ahmed Khan as under his dynamic leadership, Pakistan ju-jitsu players have been shinning in the mega events across the world and winning international laurels for the country. “I am very hopeful that our youngsters and professional players will train harder for the upcoming international events and win more medals and glories for Pakistan.”

PJJF President Khalil Ahmed Khan also thanked Syed Shahid Ali for sparing his precious time and witnessing the matches of the current and future stars of the country with keen interest. He informed the chief guest about the recent performances of ju-jitsu players and also told him about the upcoming events, where the men in green will participate and try to win more glories for the country.

“There is a lot of talent in the country but the need of the hour is to provide this talent all the basic and latest facilities, financial support and maximum international exposure as this is the only way to help Pakistan players dominate in the game of ju-jitsu and bring international laurels for Pakistan.”