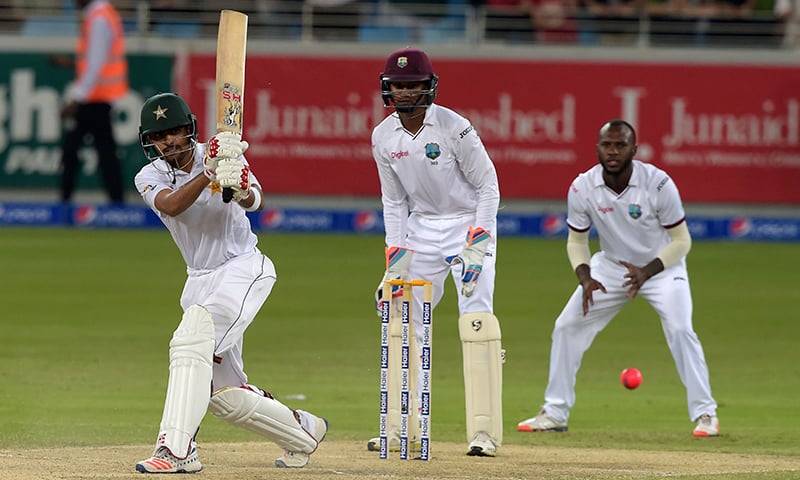 KINGSTON – An unbeaten half-century by Pakistani captain and star player Babar Azam helped visitors to a 124-run lead over the hosts with five second-innings wickets in hand at stumps on the rain-affected third day of the first Test.

Trailing by 36 runs on the first innings, Pakistan reached 160-5 by stumps with Babar 54 not out and Faheem Ashraf on 12.

Azam, who was 28 when the rain began, built a threatening fifth-wicket partnership with Mohammad Rizwan, which was worth 56 when it was broken by Jason Holder with a superb leg-cutter which had Right-handed batsman caught behind.

Pakistan led by 85 runs at that point and the home team stands forward however Babar and Faheem played a patient partnership which had added 39 by stumps. The half-century of the Pakistani captain came from 117 balls whereas Faheem faced 79 balls for his 12 runs.

Meanwhile, the pitch is still favoring fast bowlers and a lead of more than 200 might be hard to chase down.

Pakistan began the day by quickly wrapping up the first innings of the West Indies. The hosts resumed at 251-8 and added only two more runs before the innings ended, with both wickets going to Shaheen Afridi.

KINGSTON – Mohammad Abbas’ strikes Thursday put West Indies on the back foot after Pakistan were bowled out ...

However, Imran Butt returned to the pavilion in the third over, with only one run on the board, but was steadied by Azhar Ali who put on 55 for the second wicket with Abid.

Team Green stumbled again when Abid and Fawad were both out with a total of 65. Young Pacer Jayden Seales took both wickets. The 19-year-old, who took 3-70 in the first innings, had 2-50 at stumps.