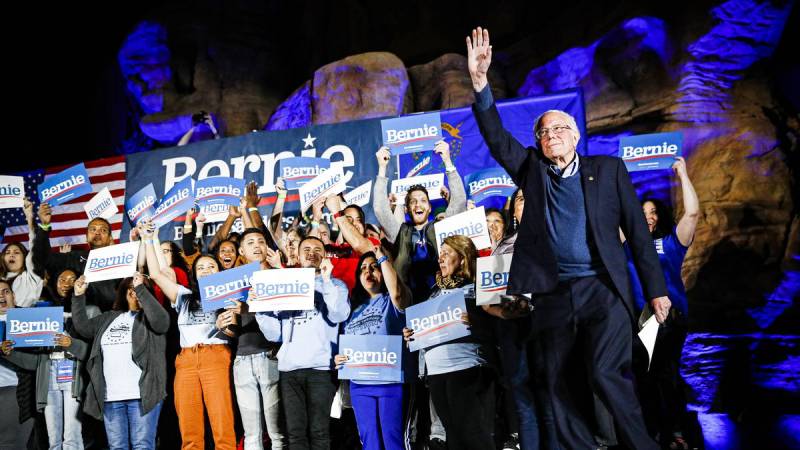 Senator Sanders, 78, often maligned by opponents as a liberal outsider, won the party’s caucuses in Nevada, a state in the Western United States, by a comfortable margin with the help of diverse backers, according to polling agency Edison Research.

If we stand for justice, if we stand for compassion, if we understand that we are all in this together, there is nothing we cannot accomplish. Thank you Nevada! pic.twitter.com/2kf9ixVKxN

The senator gave a victory speech at Cowboys Dancehall in San Antonio, Texas, on Saturday evening.

“In Nevada we have just put together a multi-generational, multi-racial coalition, which is not only going to win in Nevada, it’s going to sweep this country.” Sanders told his cheering supporters.

He said that he is feeling confident about his chances in Texas too – one of the 14 states that votes on Super Tuesday on March 3.

His campaign has several members from diverse communities and latest polls show he has been consistently expanding his support among African-Americans ad Hispanic American communities across the country.

Sen. Sanders has taken clear positions in support of the struggle of Kashmiris and Palestinians for their unalienable rights.

Speaking at the annual conference of the Islamic Society of North America (ISNA) in September last year, Sanders called India’s repressive actions in Jammu and Kashmir as “unacceptable”.

“The communications blockade must be lifted immediately, and the United States government must speak out boldly in support of international humanitarian law and in support of a UN-backed peaceful resolution that respects the will of the Kashmiri people.”

Crucially, Sanders used the words “Kashmiri people,” a not-so-subtle signal that he accepts the existence of Kashmir as an independent political entity.

On Palestinian rights, Sanders has supported a two-state solution, emphasizing that “we must treat the Palestinian people with the respect and dignity they deserve.”

The Israeli people have the right to live in peace and security. So do the Palestinian people. I remain concerned about the platform AIPAC provides for leaders who express bigotry and oppose basic Palestinian rights. For that reason I will not attend their conference. 1/2

The Nevada win comes after Sanders narrowly defeated former South Bend, Indiana, Mayor Pete Buttigieg in New Hampshire. He will now move past Buttigieg and take his first delegates lead of the year on Saturday.

His victory in Nevada on Saturday showcased his support from the racial minorities that will play a huge role in determining the outcome of the nominating fight.

While Iowa and New Hampshire are more than 90 percent white, Nevada is 30 percent Latino and 10 percent black. The State also has the nation’s fastest growing Asian-American population.

Sanders struggled to win over voters of colour in the 2016 Democratic primary, which ultimately led to his defeat against Hillary Clinton.

But this time around, polls show Sanders has built strong support from Latino voters.

A Univision survey released last week found Sanders at 33 percent support among Hispanics, ahead of former Vice President Joe Biden, who was at 22 percent.

And while Biden has been buoyed in the race by his support from African-American voters, who make up more than half of the Democratic electorate in South Carolina, new polls find Sanders making big gains in the state, narrowing the former vice president’s lead.

The latest NBC News-Wall Street Journal poll found Sanders and Biden in a statistical tie among black voters, with no one else running close.

Sanders led rivals by double-digits in Nevada heading into the caucuses, although the state is notoriously difficult to poll. Turnout was high, with more than 75,000 participating in early caucuses, nearly matching the entire turnout for 2016, when Clinton took 20 delegates to Sanders’s 15.

The senator did not campaign much Nevada in the week leading up to the caucuses, although about 2,000 people attended his Friday night rally in north Las Vegas at an outdoor amphitheater.

Sanders chose instead to begin campaigning vigorously in the Super Tuesday states that will vote on March 3, when about one-third of all delegates will be allocated.

Texas and California are the biggest delegate prizes on Super Tuesday. Sanders campaigned in California on Friday and he spent Saturday in Texas, where he’ll hold three rallies over the next 24 hours.

Polls find Sanders leading in both California and Texas, and the progressive senator could build on those leads in the coming days, following his momentum in the early states to vote so far.

The Buttigieg campaign and advisers to former New York City Mayor Mike Bloomberg are warning that if the party does not coalesce around an alternative to Sanders before March 3, he could build an “insurmountable” delegates lead.

In his Las Vegas concession speech, Buttigieg warned that Sanders would be a general election disaster and could cost the party down-ballot seats.

“Sen. Sanders believes in an inflexible, ideological revolution that leaves out most Democrats, not to mention most Americans,” Buttigieg said.

And he warned that Sanders had fomented a divisive movement that would turn away potential new voters.

“Sen. Sanders’s revolution has the tenor of combat, division and polarization, a vision where whoever wins the day, nothing will change the toxic tone of our politics,” he said.

But Sanders’s critics have been making that case for some time and it hasn’t slowed him yet.

And the divided field of eight candidates has made it difficult for any one rival to rise to the top and challenge Sanders, which will likely raise pressure on some low-performing candidates to drop out.

Bloomberg, the fiormer New York City mayor, has spent about a half billion dollars on a national ad campaign that boosted him in the polls ahead of this week’s debate in Las Vegas. He is the only candidate on the airwaves in all 14 Super Tuesday states.

But Bloomberg’s disastrous debate performance in Las Vegas, in which he was battered by Sen. Elizabeth Warren (D-Mass.) over accusations he has made past sexist remarks and overseen a toxic work environment for women, threatens to inflict significant damage to his campaign.

The candidates will debate again on Tuesday ahead of the Saturday primary in South Carolina.