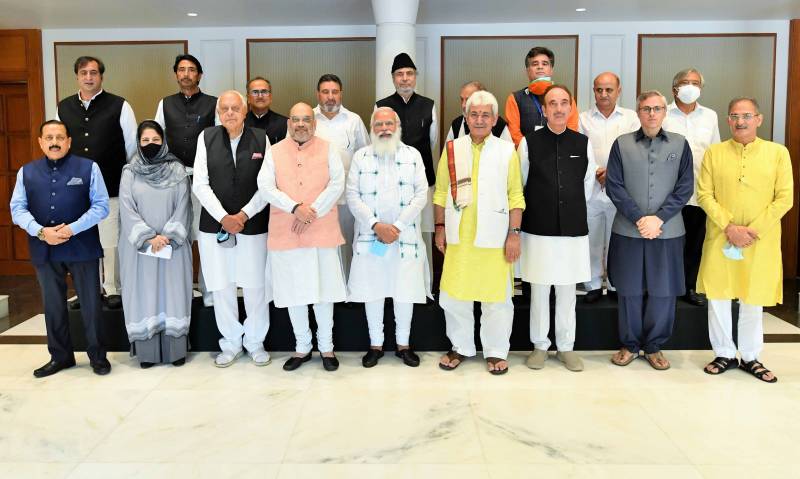 NEW DELHI — Indian Prime Minister Narendra Modi and a number of leaders from the Indian Illegally Occupied Jammu and Kashmir (IIOJ&K) held a meeting on Thursday, but failed to build a consensus on any major issue involving the disputed territory.

The media quoted Congress leader Ghulam Nabi Azad as saying that Kashmiri leaders put five demands to Modi during the meeting: restore the Indian occupied Kashmir as a state, hold state assembly elections, rehabilitate Kashmiri pundits in the disputed region and release all political workers who were detained after the Modi government’s decision to revoke the special status of Kashmir on August 5, 2019.

Azad said that 80 percent of the Kashmiri leaders spoke on Article 370, but the matter was sub-judice in the court. "Our demands included restoration of Kashmir as a full-fledged state, elections to restore democracy, rehabilitation of Kashmiri pundits, release of political detainees and provision of land employment guarantee," the former Jammu and Kashmir chief minister said.

"Home Minister (Amit Shah) said the government is committed to granting Jammu and Kashmir the status of a state. All leaders demanded full-fledged statehood," Azad said.

Today’s meeting with political leaders from Jammu and Kashmir is an important step in the ongoing efforts towards a developed and progressive J&K, where all-round growth is furthered. pic.twitter.com/SjwvSv3HIp

Experts say the meeting was meant to ward off the mounting criticism at home and abroad after Modi's Hindu nationalist government in August 2019 downgraded the region's status, split it into two federal territories, Ladakh and Jammu-Kashmir, and removed inherited protections on land and jobs for the local population.

Our priority is to strengthen grassroots democracy in J&K. Delimitation has to happen at a quick pace so that polls can happen and J&K gets an elected Government that gives strength to J&K’s development trajectory. pic.twitter.com/AEyVGQ1NGy

Since then, Indian authorities have imposed a slew of administrative changes through new laws, often drafted by bureaucrats, that triggered resentment and anger as many likened the moves to the beginning of settler colonialism. The Indian prime minister called the changes overdue and necessary to foster economic development and fully integrate the occupied Kashmir into India.

Our democracy’s biggest strength is the ability to sit across a table and exchange views. I told the leaders of J&K that it is the people, specially the youth who have to provide political leadership to J&K, and ensure their aspirations are duly fulfilled. pic.twitter.com/t743b0Su4L

Among those invited were occupied Kashmir's former three top elected officials: Farooq Abdullah, his son Omar Abdullah, and Mehbooba Mufti, who was a regional coalition partner of Modi's Bharatiya Janata Party for nearly two years after the 2016 state elections.