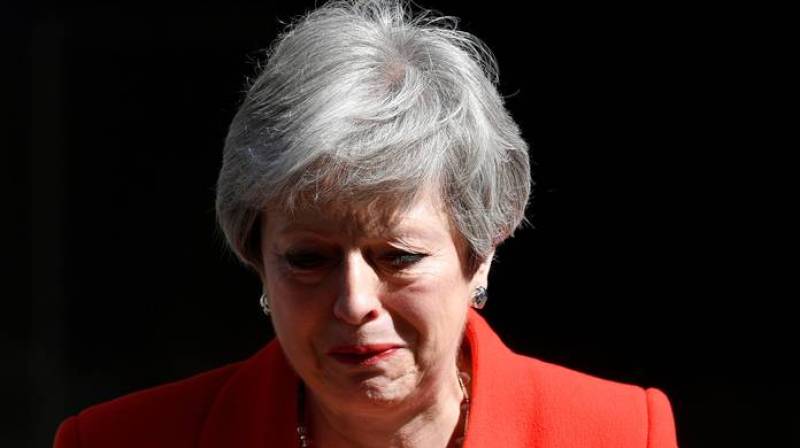 Here are the main reactions to the announcement she will step down as leader of the Conservative Party, and hence also as Prime Minister, on June 7.

The European Union said the resignation does nothing to change its position on the Brexit withdrawal deal agreed with Britain.

EU Commission President Jean-Claude Juncker noted May's decision "without personal joy", a spokeswoman said, adding that the council of EU leaders has "set out its position" on the Brexit deal.

The EU's chief Brexit negotiator, Michel Barnier, tweeted that he "would like to express my full respect for @theresa_may and for her determination, as Prime Minister, in working towards the #UK's orderly withdrawal from the EU".

One of the leading contenders to succeed May, Britain's former foreign minister Boris Johnson tweeted: "A very dignified statement from @theresa_may. Thank you for your stoical service to our country and the Conservative Party. It is now time to follow her urgings: to come together and deliver Brexit."

French President Emmanuel Macron hailed May for her "courageous work" in seeking to implement Brexit in the interests of her country while showing respect for Britain's European partners.

But the Elysee statement added: "The principles of the EU will continue to apply, with the priority on the smooth functioning of the EU, and this requires a rapid clarification."

"At a time of an important choice, votes of rejection that do not offer an alternative project will lead to an impasse."

German Chancellor Angela Merkel noted May's decision "with respect", saying they shared a "good and trusting" working relationship, according to her spokeswoman.

Pledging to keep working with May in the same spirit as long as she is in office, Merkel noted Berlin "wishes to maintain close cooperation and a close relationship with the British government", spokeswoman Martina Fietz said.

Fietz declined to comment on how the resignation could affect Brexit, as "the development depends essentially on domestic political developments in Britain".

Anti-EU populist Nigel Farage, whose Brexit Party is leading opinion polls in Britain, blamed May for misjudging the mood of her country by trying to preserve close trade ties with the bloc.

"It is difficult not to feel for Mrs May, but politically she misjudged the mood of the country and her party. Two Tory leaders have now gone whose instincts were pro-EU," he wrote in a tweet, referring to May and her predecessor David Cameron.

In Moscow, the Kremlin said that May's premiership has been a very difficult time for Russia's relations with Britain.

"Under these circumstances, a hard Brexit appears to be a reality that is near impossible to stop," Spanish government spokeswoman Isabel Celaa told reporters, adding that the British government and parliament would be "solely responsible for a no-deal exit (from the EU) and its consequences".

On the financial markets, sterling briefly sank below $1.27 but did not reach the four-month lows that were plumbed a day earlier and was still higher compared to late Thursday, as dealers argued that the resignation news had already been priced in.