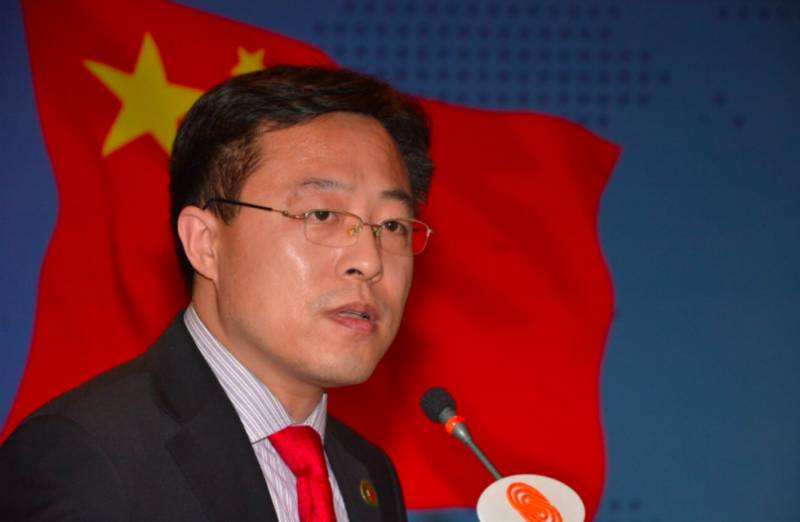 ISLAMABAD - Deputy Chief of Mission at the Chinese Embassy, Lijian Zhao has taken a strong exception to the glorification of Baloch Liberation Army (BLA) by an Indian journalist, calling for tough Twitter vetting.

Zhao took to social media on Saturday and requested Twitter to suspend the account of Aditya Raj Kaul who has been trying to portray the terrorists in a favourable light.

Kaul, who is Senior Associate Editor and Anchor with the ultra-nationalist Republic TV, is uploading videos featuring BLA militants who attacked Chinese consulate in Karachi on Friday.

Everyone please report this account. Dear @Twitter, this verified account is glorifying terrorists who attacked Chinese Consulate in Karachi. Doesn't this fall under instigating violence? After Twitter suspended BLA handle, he is now head of its media wing. @TwitterSupport pic.twitter.com/EyLmjIadF7

Although the attack was repulsed owing to timely response of law-enforcers, Indian media has been peddling the agenda of terrorists after the incident.

BLA had claimed responsibility for the attack which took the lives of two policemen and two civilians. The group also uploaded the pictures of the militants following which its account was suspended.

However, after the suspension, Indian media took up the 'responsibility' to further the interests of BLA and militant groups and assumed the role of a propaganda machine.

Dismayed by the promotion of BLA, the Chinese diplomat has asked the social media users to report the account of Aditya Raj Kaul saying, he is now head of its media wing.

The attack on Chinese consulate has also increased calls for tackling the 5th generation warfare in which the cyberspace is used as a battlefield to tarnish the image of the rival state.

Security experts in Pakistan claim that  BLA has links with India and the unholy collusion is behind the subversive activities in Pakistan.

Another vindication of BLA’s connivance with India is the arrest of Kulbhushan Jadhav – an Indian spy arrested from Balochistan who confessed to involvement in insurgent activities in Pakistan.