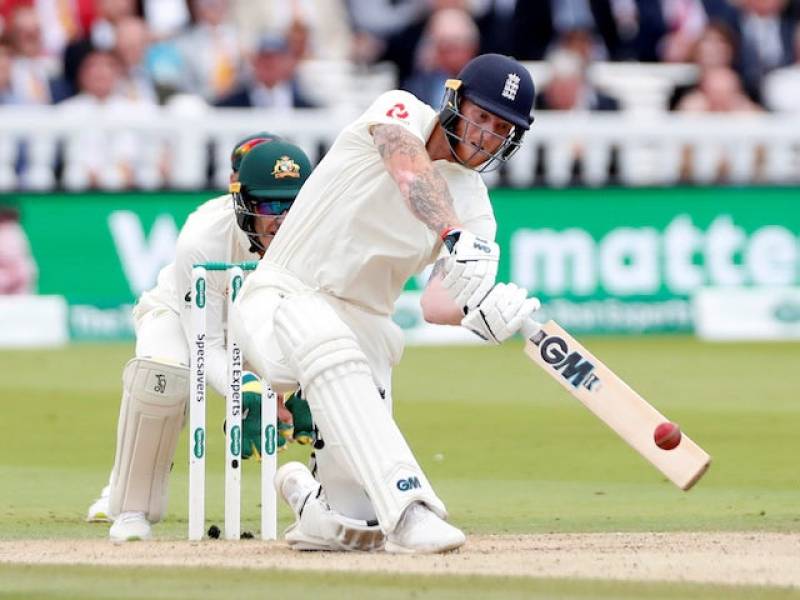 LEEDS - Ben Stokes was the hero yet again as his incredible unbeaten century saw England to a thrilling one-wicket win in the third Ashes Test at Headingley on Sunday.

England -- all out for a woeful 67 in their first innings -- were 286-9, still needing 73 more runs to reach a victory target of 359 when bespectacled No 11 Jack Leach walked out to bat to join Stokes at the crease.

"There's nothing like being out there in the end and getting your team over the line. I didn't get nervous till we needed single figures, I didn't know what to do then," admitted Stokes.

Australia, who would have retained the Ashes had they won, missed a clear chance to run Leach out when Nathan Lyon failed to gather a throw and then paid dearly for squandering a review.

This was only the fourth time a team had made more than 300 to win in the fourth innings of a Test at Headingley.

"It was a very special feeling. Stokesy was unbelievable. It was like nothing I've ever seen before. And the crowd was insane," admitted Leach.

Australia captain Tim Paine said: "It's hard to take, losing that from that position but you tip your hat sometimes.

"Ben Stokes played an unbelievable innings and in the end he was too good for us."

As Leach looked on, all-rounder Stokes went into one-day mode by driving off-spinner Lyon for two straight sixes and then produced a stunning reverse against him that sailed high over deep point.

Stokes's extravagant scooped six off Cummins reduced the target to 40.

Despite Australia captain Tim Paine having scattered all his fielders to the boundary, Stokes pulled Josh Hazlewood for four to complete a remarkable 199 ball-century -- his second in a row after his 115 not out in the drawn second Test at Lord's -- featuring eight fours and five sixes. Stokes then hoisted the next two balls for six.

He rode his luck when a sliced two off Cummins was dropped by a diving Marcus Harris at third man.

Stokes, however, commandingly pulled and drove Cummins's next two balls for for four to leave England just nine runs shy of victory.

But a single left Leach on strike with two balls left in the over. The first of those sailed over Leach's head and the next saw Australia waste a review for a ball that pitched outside leg stump.

England now needed eight -- or two boundaries -- as Stokes faced Leach. The third ball of the over saw Stokes drive Lyon for a six that just cleared Marnus Labuschagne at long-on and England needed two to win.

A colossal mix-up between Stokes and Leach should have seen the No 11 run out but Lyon fumbled the return.

Lyon then had an lbw appeal against Stokes turned down by umpire Joel Wilson only for replays to suggest it would have been out.

But Australia had used up all their reviews. England still needed two to win but Leach, who made a career best 92 as nightwatchman in a recent Test win over Ireland, was on strike to Cummins.

Leach though managed a single that tied the scores as he got off the mark after 59 minutes at the crease.

And Stokes then cut Cummins for a boundary to seal an astounding triumph.

The left-handed batsman faced 219 balls in total, with 11 fours and eight sixes in a superbly paced five-and-a-half hour inninngs.

It seemed England's chances had evaporated when they lost three wickets for just 16 runs after lunch to be reeling at 261-7.

England had yet to add to their overnight score of 156-3 when Stokes missed a pull off a Hazlewood bouncer that smashed into his helmet, with the stem guard protecting his neck flying off at the back.

But he was cleared to bat on and when captain Joe Root was out for 77 after adding just two to his overnight score Stokes, ably assisted by Jonny Bairstow (36) counter-attacked, with England scoring 60 runs in eight overs after Australia took the new ball.