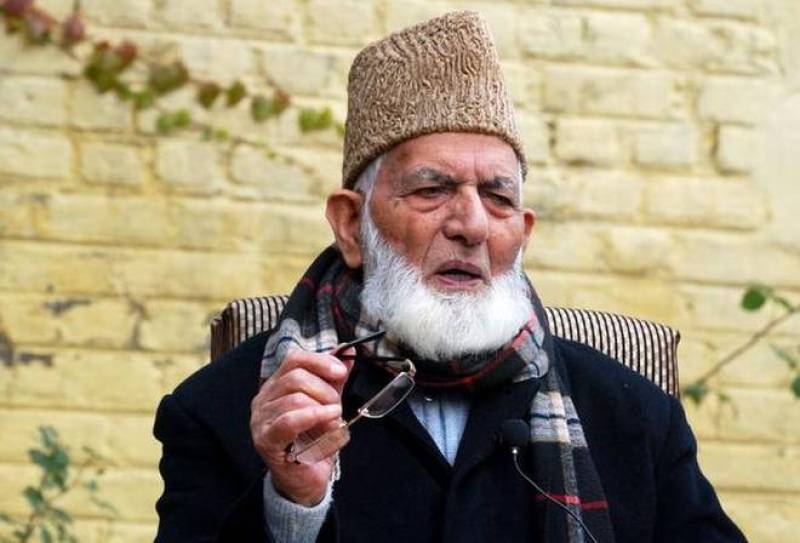 SRINAGAR - Chairman of the All Parties Hurriyat Confe­rence (APHC) Syed Ali Shah Geelani issued a five-point "programme of action" for resistance against the Indian government as lockdown in Kashmir valley continues.

The Hurriyat leader called on the residents of the valley, Indian police officials deployed in the territory, and the Pakistani people to act against what's going on in the serene valley.

Geelani made the calls in an open letter to the people of occupied Kashmir which surfaced on Sunday and detailed and condemned recent events, including the revocation of special status and a continued communications blackout.

Gillani issued a "heartfelt appeal" to the residents of Jammu and Kashmir to 'continue to resist [...] the naked Indian brutality with courage, urging to organise "peaceful protests and demonstrations" in their areas.

"While doing so, we must remain absolutely disciplined and not give the enemy, who is armed and ready to kill, any excuse whatsoever to hurt our lives and property. It is very important that our demonstrations remain absolutely peaceful so that more and more people are able to join. If the Indian armed forces still attack our gatherings, the entire responsibility for the possible loss of lives and property will be on them, and the world will remain witness to their deeds," he wrote in the letter dated August 23rd.

Geelani also called on Indian government officials, bureaucrats as well as police officers employed from the occupied region to realise that even when they are 'hand-in-hand in the oppression of their own people, the Indian State does not trust them'.

He urged them to protest against the 'humiliation' meted out to them by the Indian government.

"We have all seen how during the recent events, the Jammu and Kashmir police force was disarmed and the entire command was given to the Indian Army and paramilitaries," Geelani highlighted.

"Even if such a humiliation does not awaken them to stand up and protest, probably nothing will, and then they should mourn their consciousness and faith, and wait for their destiny of total irrelevance like pro-India politicians in Kashmir."

Geelani also urged Kashmiris living outside the occupied territory to participate in the resistance struggle by acting as 'ambassadors of the Kashmiri people' all over the world.

"They should use their knowledge of Kashmir’s history and their own lived experiences to highlight the oppression and brutalities of the Indian State. They should also connect with other marginalised and struggling nationalities in other parts of the world and forge solidarities of resistance," he observed.

Moreover, the Hurriyat leader also stressed the people of Pakistan and their leaders in particular, and the Muslim ummah, in general, to come forward at this crucial juncture to help the 'besieged people of Kashmir'.

"You are an important party to the Kashmir dispute and this is the time for unity and action," he said.

"Today, if you once again get ensconced in so-called pragmatism and fail to act decisively, then neither history will forgive you nor will your coming generations. You must continue to heighten your political and diplomatic initiatives to the highest level and respond to the deceit of the Indian occupation with full strength and determination."

Geelani stated that the 'Indians State’s occupation and its machinations' threatens not only the people of occupied Kashmir but also the Dogra community of Jammu, Buddhists community in Ladakh, Muslims of Pir Panjal and Kargil.

"The Indian State not only wants to occupy our land, but it also intends to destroy our collective identity and brotherhood," he warned. "We must not allow their heinous plot to succeed at any cost. We must all together stand with the resistance struggle to secure our lives, property, and our demographic character."

"India should know that even if they bring their entire armed forces into our State, even then the people of Jammu and Kashmir will not let go the struggle for their rights and liberation," he added.

The Kashmiri leader said that the government's actions show the real 'deceitful and brutal nature of the Indian State in Kashmir'.

"The rulers from Delhi are drunk [on] power and arrogance of majoritarianism and they have snatched away all precepts of humanity, ethics, and democracy," he wrote.

"The Indian State subjected the people of Kashmir to a war-like situation, exacerbated by a host of official rumours and psychological warfare, even before the announcement of the decision."

Geelani also highlighted the measures taken by the Indian government to block local and international media from covering the situation in occupied Kashmir, saying that the state has long used elaborate 'deception to obfuscate Kashmiri people’s narrative of struggle' at the international level, Dawn News reported.

"The oppressors might try to hide reality, but history will not spare anyone. The blank pages will speak loudly," he declared.

He said that in spite of India’s best efforts, Kashmir issue is being highlighted throughout the world like never before.