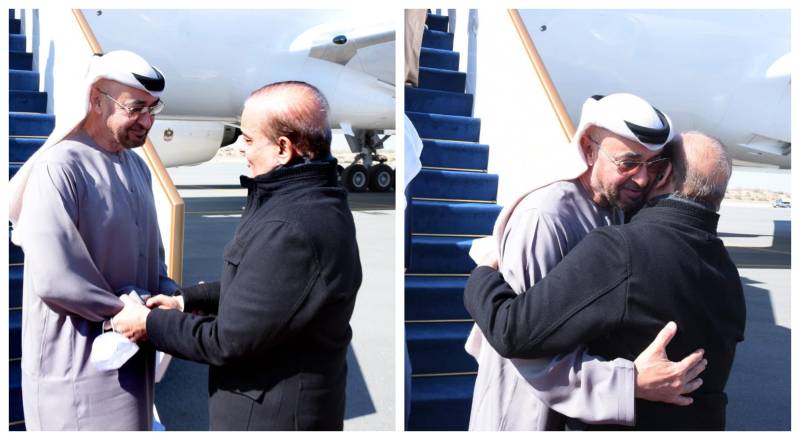 The UAE president arrived in the city of Rahim Yar Khan during his visit to Pakistan earlier in the day. Upon his arrival at the airport, the president was received by PM Shehbaz Sharif, and a number of ministers and senior officials.

During the meeting, the two sides reviewed the historical UAE-Pakistan ties and opportunities of enhancing joint cooperation in a way that serves the mutual benefit of the two countries and their peoples across various domains, which falls within the framework of the two countries' strategic partnership, state-run WAM reported.

Extremely delighted to receive my brother His Highness Sheikh Mohamed Bin Zayed @MohamedBinZayed on his arrival in Pakistan, which is his second home. Building on our last meeting, we discussed ways & means to further strengthen our brotherly relations. pic.twitter.com/mGu94e9UVr

The prime minister welcomed the visit of Sheikh Mohamed to Pakistan, stressing that it represented a strong drive towards developing the relations of the two friendly countries.

The two parties discussed various cooperation paths especially in the fields of economy, trade and development, which are in line with the two countries' sustainability objectives.

They also discussed several issues of common interest, and exchanged views on a number of regional and international issues of mutual concern.

For his part, Prime Minister Sharif reaffirmed his country’s pride in the historical UAE-Pakistan relations, expressing his appreciation to the UAE for its continuous support to Pakistan in various conditions, especially in the development fields.

This is the second interaction between the two leaders of the friendly nations as PM Shehbaz visited Abu Dhabi earlier this month to discuss economic ties.

Following PM Shehbaz’s visit, the cash-strapped country gets a lifeline rollover of $2billion loan from Emirates, a move that Pakistan needs to make some breathing amid shrinking reserves.

Lately, the country’s top leaders including Prime Minister and Finance Minister visited friendly nations as forex reserves held by the country’s central bank fell to a critical level of $4.1 billion.

Pakistan approached the friendly countries as the ninth review of IMF is yet to proceed.