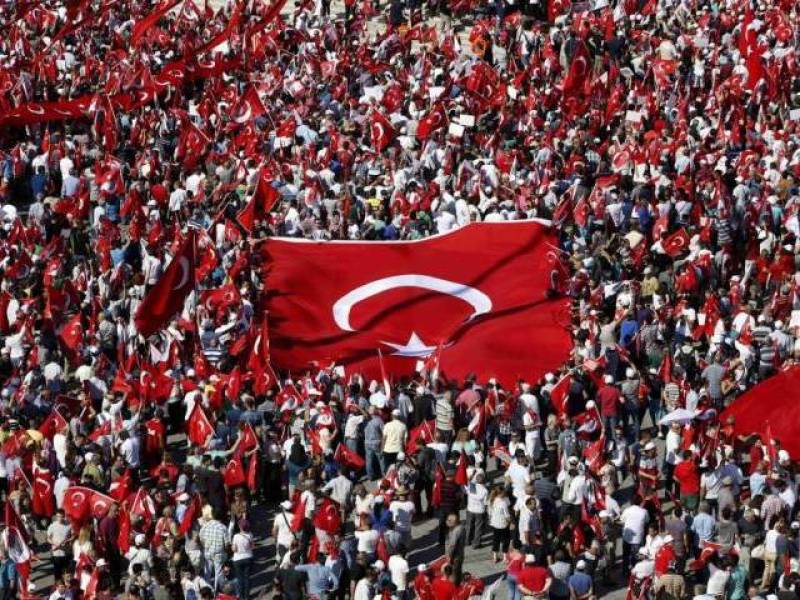 ANKARA - Tens of thousands of supporters of Turkey's ruling and main opposition parties, usually bitter foes, rallied together on Sunday in support of democracy following the failed military coup and the tightening of President Tayyip Erdogan grip on the country.

Demonstrators held a cross-party "Republic and Democracy" rally in Istanbul's central Taksim Square in the spirit of unity following the failed coup, in which at least 246 people were killed and more than 2,000 injured.

In a rare move, pro-government channels broadcast a live speech from the podium by main opposition leader Kemal Kilicdaroglu.

“This is a day to unite, a day to stand up against coups and dictatorial regimes, a day to let the voice of the people be heard,” he said at the rally, organised by his secularist opposition CHP but also backed by the ruling Islamist-rooted AK Party and other opposition groups.

According to reports, Erdogan will try to capitalize on the large size of the crowd of all political persuasions to reassert full control over the country, a NATO ally and an important partner in the US-led fight against Islamic State.

In another demonstration of unity after the coup, which was staged by a faction within the armed forces, the head of Turkey’s air force issued a rare statement stressing “absolute obedience” to the chief of the military General Staff. Some members of the air force were also involved in the coup.

The chief of the military General Staff, Hulusi Akar, who was held hostage by the plotters on the night of July 15, condemned the plotters on Sunday as “cowards in uniform” who had greatly harmed the nation and the army.