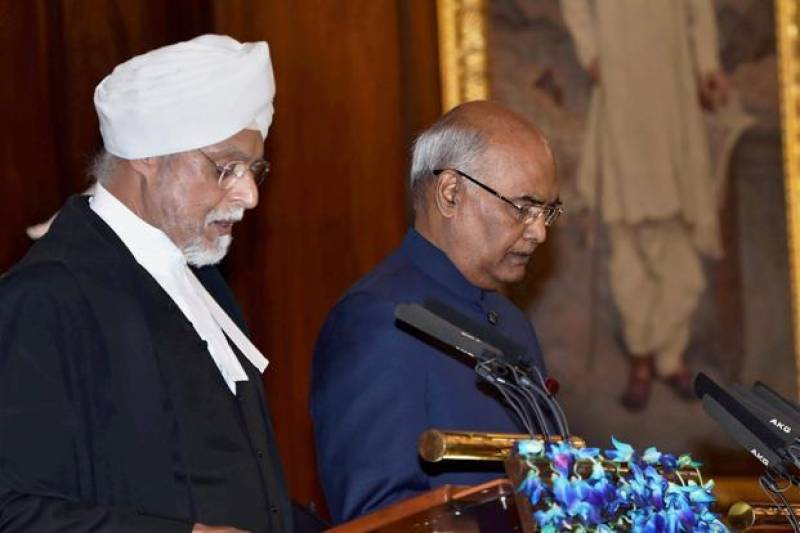 NEW DELHI - Ram Nath Kovind was sworn in as India's president Tuesday, becoming the second leader from the oppressed Dalit community to be heading the state.

Kovind, a former lawyer and state governor was elected to the largely ceremonial position last week with more than 65 per cent of the vote by members of India's parliament and state assemblies.

He was administered the oath of office by Chief Justice JS Khehar in the central hall of Parliament. The ceremony was attended by Prime Minister Narendra Modi, former PMs Manmohan Singh and Deve Gowda, former president Pratibha Patil, chief ministers and MPs of both Houses of Parliament.

“I grew up in a mud house, in a small village. My journey has been a long one, and yet this journey is hardly mine alone. It is so telling of our nation and our society also,” the 14th president Kovind said after taking the oath of office in parliament.

“For all its problems, it (nation) follows that basic mantra given to us in the preamble of the constitution ─ of ensuring justice, liberty, equality and fraternity, and I will always continue to follow this basic mantra.”

The 71-year-old was nominated by the ruling right-wing Bharatiya Janata Party. The nomination was seen as an attempt by Prime Minister Narendra Modi to tighten his grip on power and gain politically ahead of re-election in 2019.

Kovind has said he will use his position to improve Dalit community, a marginalised 200-million strong community once known as “untouchables” and ranked among India's poorest.

“Our diversity is the core that makes us so unique... We are so different yet so similar and united,” Kovind said.

India's prime minister wields executive power, but the president can send back some parliamentary bills for reconsideration and also plays a guiding role in the process of forming governments.

Kovind is the second Dalit president after K. R. Narayan, who held the post for five years from 1997.