‘Bench-fixing is also a crime like match-fixing,’ Maryam targets judiciary ahead of SC hearing on Punjab CM election 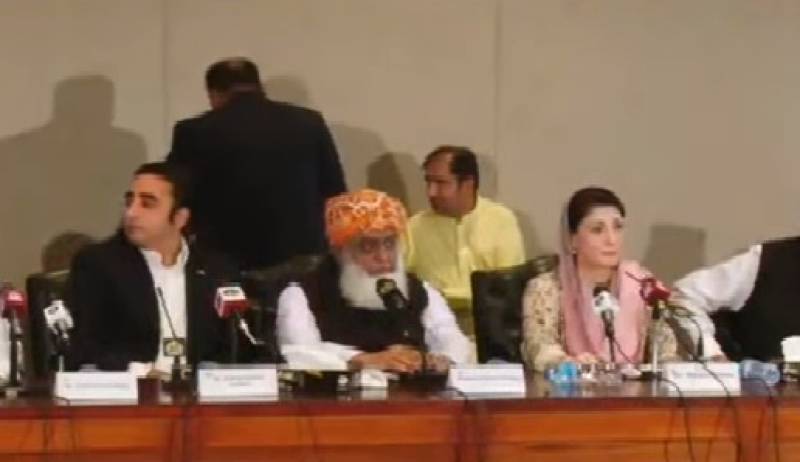 She was addressing a fiery press conference along with leaders of coalition partners, including Maulana Fazlur Rahman, Bilawal Bhutto Zardari, Khalid Magsi, Mohsin Dawar and Aimal Wali Khan, ahead of the hearing of a petition against Punjab chief minister’s election in the Supreme Court of Pakistan.

Maryam Nawaz expressed concerns over the three-member bench as she feared one-sided decision in the Punjab CM election case. “Bench fixing is also crime similar to match fixing,” she said while demanding the chief justice to form a full court bench to hear the petition.

She said that institutions are insulted from within and not outside, adding that an entire case is blown up with one wrong decision. “Rights decisions trigger no criticism,” she said.

Maryam said that ever since Hamza became the chief minister, PTI leaders have been repeatedly approaching the top court.

Referring to the PTI's July 22 petition against the chief minister's election, Maryam said that the workers of the Imran Khan’s party broken into the building of the top court’s Lahore registry, adding that it was opened in the night to facilitate PTI.

She recalled that former prime minister Nawaz Sharif was removed on a baseless Iqama case, adding that it was also for the first time in Pakistan’s history that the court formed joint investigation teams against PML-N.

“I was put in death cell but Imran Khan’s sister was asked to pay fine and get free,” she highlighted, adding that the top court also closed various cases against PTI government, including BRT.