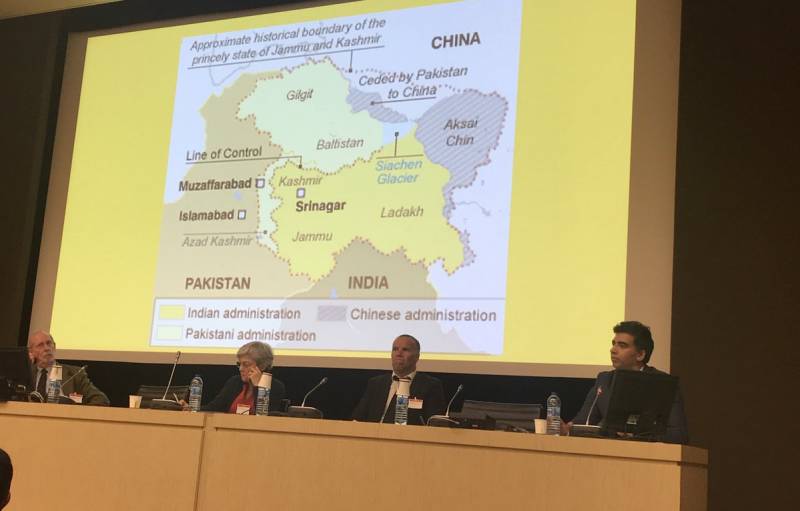 ISLAMABAD – For the first time, the issue of Kashmir was highlighted in the French Parliament at a symposium organized by Jean Bernard Sempastous, the President of Pakistan France Friendship Group, which was attended by French parliamentarians, scholars and human rights activists.

Speaking at a conference titled 'Kashmir - the oldest conflict of the world' held in Paris on Tuesday, Jean Bernard Sempastous said the 70-year-old Kashmir dispute needed to be resolved at the earliest.

He said the Friendship Group decided to organize this event to raise information about the long-standing issue of Kashmir, says a message received Wednesday from Paris.

He said after a new historical turning point since August, reflection on this oldest conflict of the world deserved full attention.

Sempastous called upon both Pakistan and India to exercise maximum restraint and take steps to resolve the issue by peaceful means.

He also stressed the need for restoration of fundamental freedom of the people of Kashmir.

Pakistan's ambassador to France Moin ul Haque in his speech thanked the French National Assembly for organizing the first-ever conference on Kashmir.

He highlighted the plight of the people of Jammu and Kashmir, who for the last seven weeks were facing an unprecedented lockdown and curbs on their fundamental freedom.

The ambassador also conveyed the message of President of Azad Kashmir Sardar Masood Khan in which he requested the French parliament to hold anopen debate on the humanitarian emergency in Jammu and Kashmir, lobby with relevant UN and international and play role as permanent member of the Security Council for peaceful settlement of the Kashmir dispute as per UN Security Council Resolutions.