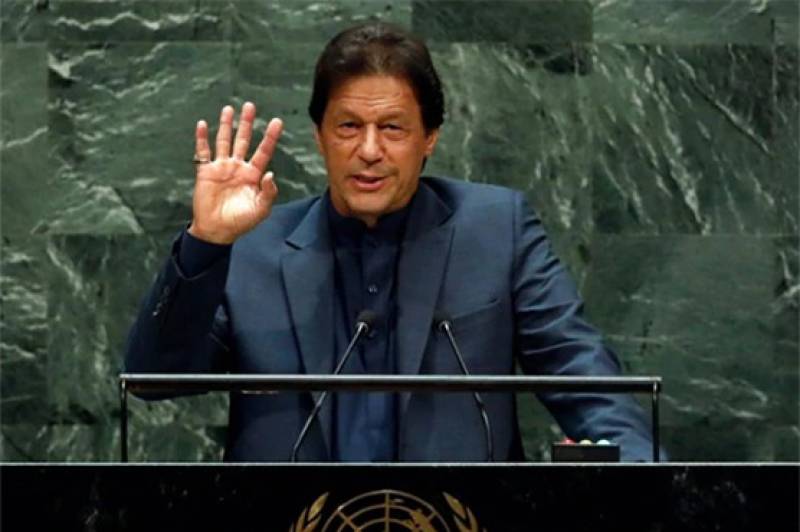 He was virtually addressing the 75th Session of the UN General Assembly today (Friday), touching upon a host of issues, ranging from Kashmir dispute, peace in Afghanistan, Islamophobia, plight of minorities in India, COVID-19 pandemic to the issue of climate change.

He said that shrine belonged to Muslim are being destroyed, adding: “Our Prophet Muhammad PBUH’s blasphemous caricatures published once again in Charlie Hebdo”.

He lamented that India in the only state that sponsors Islamophobia. “Modi’s RSS inspired politics has fuelled the idea of a Hindutva state, burying the very principles of Nehru and Gandhi’s ideology”.

Khan urged the international community to prosecute the Indian civil and military personnel involved in state terrorism and serious crimes against humanity in Indian Illegally Occupied Jammu and Kashmir.

The Prime Minister asked the global community to investigate the grave human rights violations, being perpetrated with complete impunity in IIOJK by the Indian occupation forces.

Highlighting the Indian atrocities against the Kashmiri people, the Prime Minister said these are well documented in several reports, including that of the UN High Commissioner for Human Rights. He said India illegally and unilaterally sought to change the status of occupied territory on fifth August last year and deployed additional troops, bringing the total number to 900,000 to impose a military siege on eight million Kashmiris. All Kashmiri political leaders were incarcerated; about 13,000 Kashmiri youth were abducted and thousands tortured; a complete curfew was imposed, accompanied by a total communications blackout.

Imran Khan said India has extra-judicially murdered hundreds of innocent young Kashmiris in fake "encounters", refusing even to hand over their bodies for burial. The Kashmiri media, and those daring to raise their voice, are being systematically harassed and intimidated through the use of draconian laws.

The Prime Minister said the military siege is being followed by moves to change the demographic structure of the occupied territory. This is an attempt to obliterate the distinct Kashmiri identity in order to affect the outcome of a plebiscite envisaged in the UN Security Council resolutions.

Imran Khan said brave Kashmiri people will never submit to Indian occupation and oppression. Their struggle is indigenous. They are fighting for a just cause and generation after generation have laid down their lives to rid themselves of Indian occupation.

The Prime Minister reaffirmed Pakistan's commitment to stand by their Kashmiri brothers and sisters in their legitimate struggle for self-determination.

The premier shared Pakistan's success in controlling coronavirus pandemic. “COVID-19 pandemic has demonstrated the need for community. There could have been more people dying of hunger than the virus, in developing countries like ours”.

He said that Pakistan imposed a smart lockdown, a strategy that was heavily criticized but it proved successful as it saved society’s vulnerable sections and country’s economy.

“We appreciate the G20’s debt relief for the developing world and support from the IMF, World Bank, and other bodies”.

He highlighted that money that should have been used on human development in developing countries has been siphoned by corrupt leaders to havens in developed countries.

He urged developed countries to show a will for curbing the menace of money laundering from developing countries, adding that there are robust anti-money laundering and anti-terror financing models.

"I request this assembly to channelize efforts towards stopping the illicit flow of wealth from developing countries".