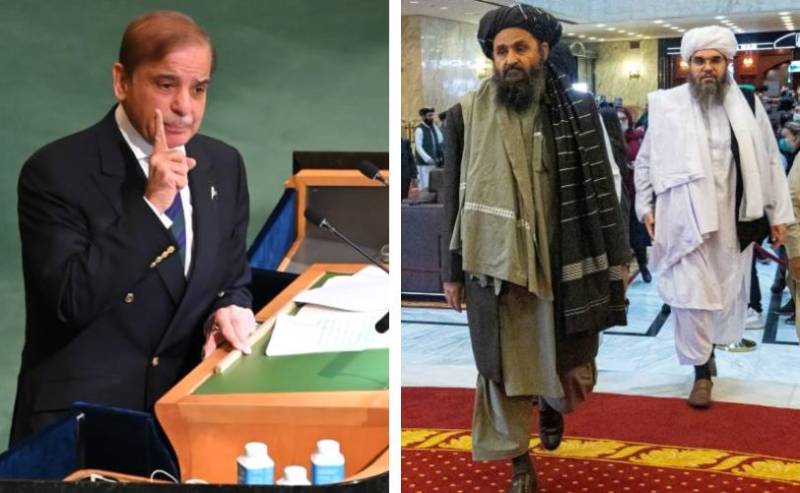 ISLAMABAD – Prime Minister Shehbaz Sharif raised concerns over the use of Afghan soil by terrorists for activities against Pakistan during his speech at the United Nations, however, Kabul refuted such claims, saying no terror group is present in Afghanistan.

As PM Shehbaz mentioned the threat posed by the terror groups operating from Afghanistan, especially Daesh and Tehreek e Taliban, the interim government called it incorrect information, saying such territory of Afghanistan will not be used against any other country nor does any armed group currently have a presence in Afghanistan.

“Rather than raising unsubstantiated concerns and allegations, the world should engage positively with the Islamic Emirate by sharing their view and concerns directly and not through the media or public statements,” Afghan foreign officials said.

Statement by Ministry of Foreign Affairs of the Islamic Emirate of Afghanistan regarding concerns expressed by countries at the 77th UNGA session pic.twitter.com/gzXLETvLYX

Islamabad even called on world communities not to abandon Afghanistan after the Taliban takeover.

Lately, Pakistan started an Afghan brokered peace agreement with the TTP, but that failed, despite many clerics and tribal elders visited Kabul.

ISLAMABAD/KABUL – Tensions are running high on the Pakistan-Afghanistan border after clashes in the Dand Patan ...

Pakistan Army said terrorists from inside Afghanistan opened fire on Pakistani troops stationed in Kurram, resulting in heavy casualties for the insurgents.