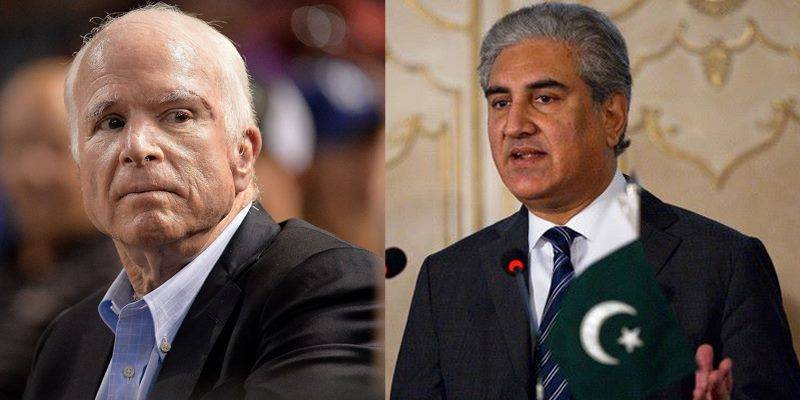 ISLAMABAD - Pakistan 's Foreign Minister Shah Mahmood Qureshi expressed his condolences on the passing of US Senator John McCain who died on Saturday following a battle with brain cancer at the age of 81.

“Thoughts and prayers of the people of Pakistan are with the family and friends of Senator McCain,” the statement from Foreign Office read.

“Senator John McCain had an illustrious military and public service career and was admired across the spectrum of US politics as a man of integrity and a champion of civility,” the statement added.

The statement further added, “As Chairman of the Armed Services Committee, Senator McCain always stood for strong Pakistan-US relations and a cooperative approach for promoting peace and building stability in the region. He will be greatly missed in Pakistan ."

McCain, who had been receiving treatment in his home state of Arizona, was surrounded by his wife Cindy and his family during his final hours.

The US senator was a former prisoner of war in Vietnam who ran unsuccessfully for president as a self-styled maverick Republican in 2008.

Chairman of the Senate Armed Services Committee, McCain was a frequent critic of his fellow Republican, Donald Trump, who was elected president in November 2016.