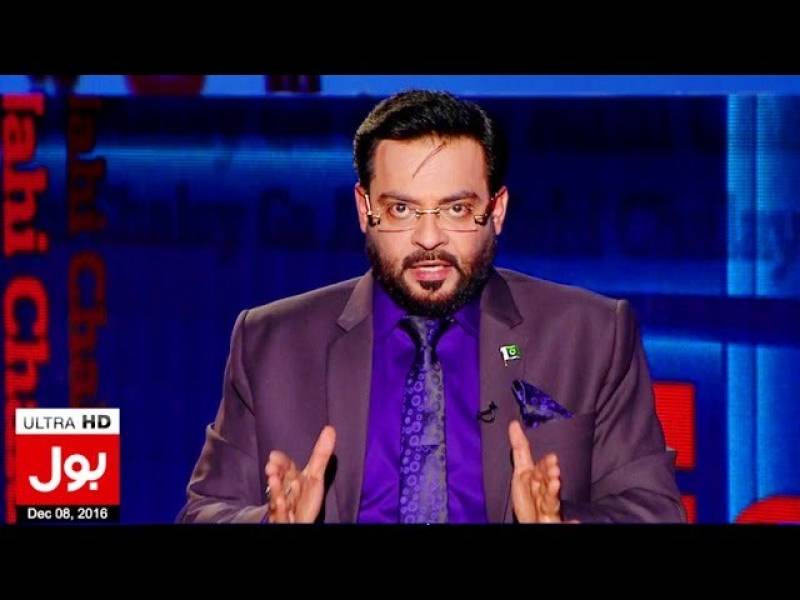 In his FIR Nasir stated that the anchor and channel were spreading religious hate-mongering and threatening the lives of certain journalists and activists.

Nasir stated that Amir Liaquat, on his show, had without any evidence accused him of being an atheist, a traitor who is an Indian Agent and is working against Pakistan and Pakistan Army, a blasphemer who insults and runs propaganda against Allah, the Holy Quran and the Holy Prophet (S.A.W).

"Similar allegations have been levelled against Salman Haider, Ahmed Wacias Goraya, Asim Saeed and Ahmed Raza Naseer, those citizens who have been recently abducted from Islamabad and various cities of Punjab," he added.

Nasir said that he was being targeted for demanding enforcement of Constitution and rule of law through legal avenues and peaceful protests in relation to recently abducted citizens of Pakistan from Islamabad and various cities of Punjab.

He alleged that Amir Liaqat also aired on his show the faces of Pakistani citizens who participated in the protests for recovery of abducted citizens and declared them traitor and Anti-State elements. He has further declared any Pakistani who is demanding safe recovery of the missing persons as either being a supporter of blasphemy or being a traitor.

"Amir Liaqat on his show also glorified the act of abduction/kidnapping of the missing activist which is an act of terrorism," Nasir held.

He said the allegations by Amir Liaqat and Management of BOL News has resulted in various death threats being issued to him through social media and cleric Khadim Hussain Rizvi has also started propagating this propaganda in his sermons declaring the missing persons as blasphemer and him as their facilitator.

Pakistan Electronic Media Regulatory Authority on Thursday banned Amir Liaquat and his programme over hate speech, according to a notification.

“Amir Liaquat, the host of the programme named Aisay Nahi Chalay Ga shall not host any programme or appear in any manner, including but not limited to, as a guest, analyst, reporter, actor, in audio, video beeper, promo/advertisement on BOL News,” a Pemra notification reads.

The notice further says “Amir Liaquat and his programme has been banned with immediate effect for preaching hate."

Earlier this month, Jibran Nasir moved the media watchdog against the TV presenter, a former member of Karachi’s MQM party. In his complaint letter to Pemra, Jibran stated the anchor of BOL Network had started a “malicious, defamatory and life endangering campaign” against him and the bloggers who went missing between January 4 to 8.